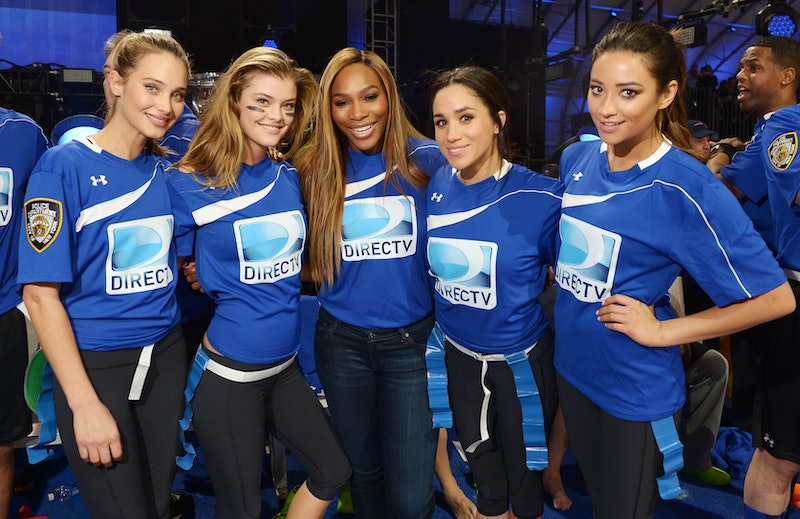 Since getting engaged to Prince Harry, Meghan Markle has become the celebrity everyone wants to befriend in hopes of getting a coveted invite to the royal wedding. The official guest list hasn’t been released, but among those with a guaranteed invite are Markle's former Suits cast members (many of whom she has remained close to after leaving the show), Elton John, Priyanka Chopra, polo player Nacho Figueras, and Serena Williams. During a recent appearance on Good Morning America, Williams, who is one of Markle’s closest friends, was asked if she was planning on attending the wedding. The athlete played coy, saying, “I don't know, I think it's during one of the tournaments.” This sounds like a believable excuse not to attend, given the Italian Open falls within the wedding date, but it's hard to imagine that Serena Williams won't be at the royal wedding.

Given what we know about her friendship with Markle, all signs point to Williams finding a way to fit the wedding into her schedule. As E! Online reports, the tennis star met Markle back in 2014 at DIRECTV’s Celebrity Beach Bowl, where they were flag football teammates. In her now defunct lifestyle blog The Tig, Markle discussed their instant bond, writing, “We hit it off immediately, taking pictures, laughing through the flag football game we were both playing in, and chatting not about tennis or acting, but about all the good old fashioned girly stuff."

Back then, Markle was an actor just three seasons into Suits, and she was probably grappling with suddenly being in the public eye. In the time since, though, she's grown far more famous, and she's probably leaned on superstar Williams for support. Both Markle and Williams have used their fame as a platform to discuss human rights, and considering they're both hardworking, inspiring women, it’s easy to see why they would've connected so well. Since they first met, the duo have been photographed together on multiple occasions and have spoken about how much their friendship means to each other in plenty of interviews.

During the recent premiere of her HBO documentary Being Serena, for instance, Williams expressed how excited she is for her friend, telling Entertainment Tonight that "[Meghan] is such a great girl and she is incredibly nice and I couldn't be happier for her." Williams was even interviewed as part of Markle’s Vogue cover story, detailing what she loves about the actor.

“Her personality just shines,” said the athlete, adding that Markle has asked her for advice on how to handle paparazzi and the new, sudden intrusion into her personal life. “I told her, ‘You’ve got to be who you are, Meghan. You can’t hide,’” shared Williams. For the sports star's own Vogue profile, Markle offered kind words, saying, “She will be an amazing mom. The very best, because she is so attuned to balancing strength and sensitivity. Plus, given that she is pretty epic at karaoke, I think she’ll put her signature Serena spin on singing lullabies for the baby. I can’t wait for that!”

Surprisingly, Markle and Prince Harry didn’t attend Williams’ wedding, but not because of any bad blood; much like the athlete’s own potential of not attending Markle's nuptials due to scheduling issues, the bride-to-be was unable to attend her friend’s wedding due to her Suits filming schedule.

Hopefully, Williams will be able to make Markle's big day. Of course, the almost-royal would probably understand if Williams couldn't attend, but as much as we all want to see Williams take over the court at the Italian Open, eveyone would be much happier to see her partying it up with the royals.