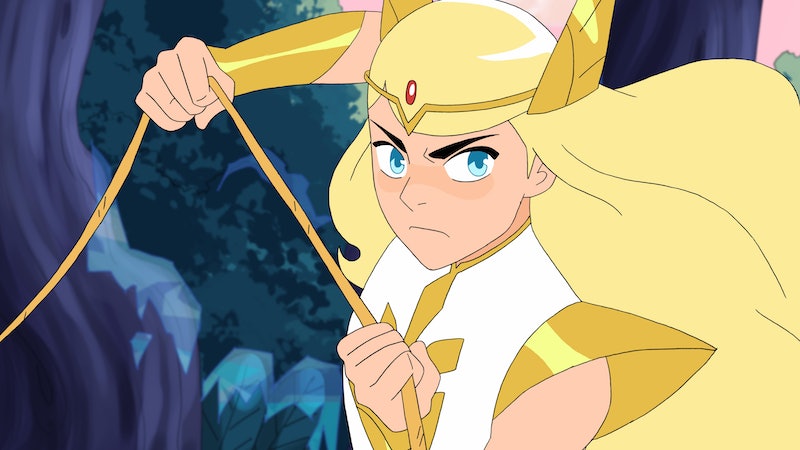 Spoilers ahead for She-Ra & The Princesses of Power Season 3. Adora's history with the Princesses and the Horde just got way more complicated. So if and when She-Ra returns for Season 4, there are a lot of threats coming for all of Etheria — and new mysteries for the Best Friend Squad to solve.

Update: She-Ra & The Princesses of Power will return for Season 4 on Nov. 5, Netflix confirmed in a press release.

Earlier: Netflix has not made an advanced announcement about a She-Ra renewal. However, it seems extremely likely that She-Ra will continue. In an interview with Animation Magazine, creator Noelle Stevenson revealed that she basically already has the fourth season planned. Here's what she said back in November 2018:

"Once the first season was green-lit, we were immediately boarding, designing, and writing. When I first pitched the show, I approached it as if had one season, but we now have four arcs of 13 episodes done. I had ideas for the big overall scheme for the show. The first thing I did was create a vision board, pulling inspiration from a variety of sources. I had the incredible luxury of working with a team of great writers. It was great to brainstorm and come up with this rich world in great detail. Get a lot of ideas and throw everything at the wall and see what sticks."

At the time, she wasn't specific about whether or not those 42 episodes were "done" as in, like, animated and edited and all of that... or just planned and written. However, the first season of Stevenson's adaptation was a hearty 13 episodes, and then Season 2 and Season 3 have had seven and six episodes, respectively. That's only half of that "four arc" promise... so there could be anywhere between two and four more seasons of She-Ra sitting in a metaphorical box somewhere and ready to go.

Hopefully, things will continue at the same pace, because Season 4 can't come soon enough after all that happened in Season 3. What started as a gritty adventure in the Crimson Waste turned into a world-shattering quest. There are now portals to other worlds! New alliances! The possibility of certain characters returning! New bad guys that are looking for the other bad guys! The world of She-Ra and the Princesses of Power almost literally exploded in Season 3, and the multiple cliffhangers at the end of Episode 6 opens up the possibility for so many more dangerous adventures.

Most importantly, Adora is finally learning more about where she came from before the Horde adopted her... or kidnapped her, depending on your point of view. For fans still holding out hope that He-Man and other Masters of the Universe characters will join the show, the reveals about other worlds and Adora's origin bring us closer to that possibility. Just stay wary, because you know that if Stevenson ever brings a character whose name is literally "He-Man" to this fiercely feminist series, there's going to be some kind of twist.

Since Season 2 of She-Ra and the Princesses of Power dropped in April, and we've now been gifted with Season 3 in August... there's not really a good way to know when the next season would arrive. It could be four months, it could be next year. Just rest assured that it will probably, most likely, fingers crossed, for sure be happening.