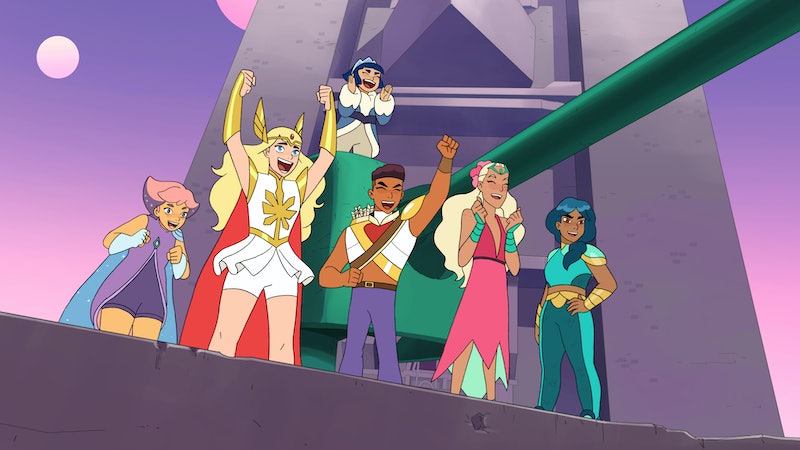 She-Ra and the Princesses of Power is back for Season 2, and the joy-filled adventures of these roused rebels fighting to save their home could honestly go on forever. There's no official announcement from Netflix yet about She-Ra and the Princesses of Power Season 3, but as the mythology keeps growing, the possibilities are endless. After all, the original comics already have plenty of new characters and lore to draw from.

In an interview with Animation Magazine, showrunner Noelle Stevenson revealed "four arcs of 13 episodes" are done — so does that mean that there are two more seasons of She-Ra automatically coming after this one?

"When I first pitched the show, I approached it as if had one season, but we now have four arcs of 13 episodes done. I had ideas for the big overall scheme for the show. The first thing I did was create a vision board, pulling inspiration from a variety of sources. I had the incredible luxury of working with a team of great writers. It was great to brainstorm and come up with this rich world in great detail. Get a lot of ideas and throw everything at the wall and see what sticks.”

This could also mean that Season 3 and Season 4 have only been outlined or scripted, so fans will have to wait and see if they actually come to fruition. Netflix announced She-Ra Season 2 on Twitter only two months after the first season dropped on Netflix. So when and if Season 3 is announced, look for it to be revealed in a similar fashion.

As for what could be coming up next, here are some things from the original Masters of the Universe that could pop up if the show gets a Season 3.

Season 1 hinted at there being more princesses out there that haven't yet joined the Great Rebellion. Who could they bring to that big ol' table? There's Flutterina, who has big butterfly wings; Peekablue, who has peacock feathers; or Sweet Bee, who is, well, a bee. There's also Glimmer's cousin Double Trouble, an acrobatic spy.

Kids can handle a little chaos theory, right? In the original She-Ra: Princess of Power series, Adora would often be sent to alternate dimensions through a big door.

In an interview with The Verge, Stevenson mentioned that some goofier characters from the original series, like Loo-Kee and Kowl, didn't fit into the genre or the world they were creating in this reboot. But what about the Twiggets? Madame Razz is in the new series, and there's definitely the possibility that some new species or humanoid races will pop up in Etheria.

That's the real mystery, isn't it? Who are Adora's parents, how did she come to be raised by the Evil Horde, and why is she destined to be She-Ra?

Unfortunately for diehard Masters of the Universe fans, it seems like He-Man won't be part of She-Ra and the Princesses of Power in a major way. However, if anyone was going to pull off the perfect take on such a traditionally macho character from the '80s, it would be Stevenson. The way She-Ra sneakily takes down toxic masculinity with characters like Bow and Seahawk is kind of everything.

Still, Adora has a lot to learn about her past. Amidst all the new characters, adventures, and group hugs that She-Ra and the Princesses of Power could bring in Season 3, that's the area that needs to be explored the most, and hopefully will as the series continues.