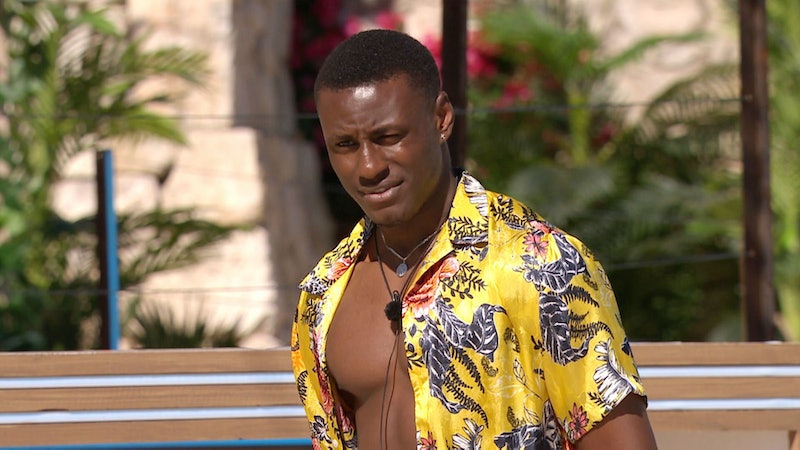 After Sherif's surprise removal on Tuesday, it seems that all Love Island fans want to know is the who, what, where, and why. You can't blame 'em, really. While there's been absolutely no word regarding an actual reason, there is one place where the now ex-islander could offer up his part of the story, and that's Love Island's Sunday spin-off show. So, will Sherif be on Aftersun this weekend, or will his exit remain a mystery?

Well, it seems that viewers won't see Sherif on Aftersun anytime soon, as Pretty52 reports that an ITV spokesperson confirmed that the former islander "won't be appearing on the show this Sunday" and that "there are 'no plans' for him to talk about his departure from the villa." I've also reached out the show's rep for any more info regarding this, but have yet to receive a reply. I'll keep you posted if I do.

As Bustle previously reported, Sherif left the villa after a mutual decision between himself and the show's producers. Since the news broke, there's been no word in regards to the reason why Sherif was removed from the villa. Unsurprisingly plenty of rumours have been circulating since the news was first announced, but at this moment in time, there has been no official word from the show or ITV.

Many also believed that the topic would be discussed in last night's episode, but as Pretty52 reports, all viewers were left with was a sentence from narrator Iain Stirling saying that following a conversation with producers, Sherif "mutually decided to leave the villa." The only other mention of the islander came from the now un-coupled Anna, who spoke of Sherif in the beach hut, as The Sun details. "It's weird being single because I started this journey off in a couple with Sherif and I really miss him," she said. "I do want to be someone's type 'to a tee'. Someone who is attracted to me from the beginning. That's what I want and I'm not settling for less."

Yesterday, Sherif did issue a statement via his Instagram story, but it didn't include any deets regarding what he actually did. Instead, he wrote:

"Thank you to everyone including my friends and family for the support I've come back to. I appreciate you all and hope I provided some good, positive moments during my time on Love Island and for anyone wondering I'm all good."

He also included the hashtags #ItIsWhatItIs and #BiggerThingsToCome so take of that what you will. A Love Island 'insider' also told the Mirror on Tuesday that while Sherif allegedly made a "silly mistake", what occurred "wasn't a criminal matter and he was spoken to and agreed to leave" and "[n]o security were involved."

The former islander not appearing on Aftersun isn't that unexpected, as even though last year's contestant Niall Aslam left the show of his own accord he didn't feature on the Sunday night round-up either. Sure, his exit was drastically different to Sherif's, but at the time a spokesperson for the show had similar sentiments in regards to Niall appearing on the show, stating to OK! Magazine that there were "no plans" for him to appear on the show.

There's still plenty of time for Sherif or the Love Island producers to give their sides of the story, but until then the details behind his removal remain unknown.