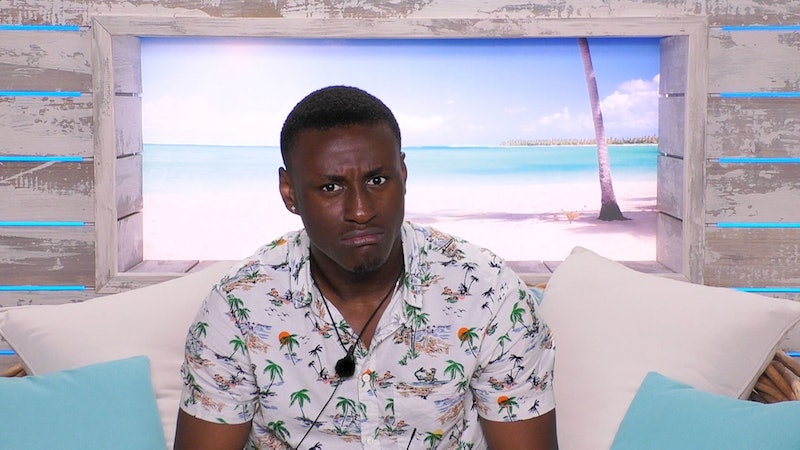 Since Mollie-Mae entered the villa last Thursday, the drama on Love Island has truly begun to unfold. But if you thought Callum being the first islander dumped and Danny Williams arrival on Sunday night was the biggest tea during the first week, prepare for that to be spilt as it has now been revealed that Sherif has been removed from the villa. So why has Sherif left Love Island, and when did this all happen?

In a statement sent to Bustle, a Love Island spokesperson revealed that "[a]fter breaking the villa rules, Sherif had conversations with the producers and it was mutually agreed that he would leave the Love Island villa." A comment from Sherif himself was also included in the statement, which read:

"In a case of poor judgement, I broke the villa rules and as a result agreed with the producers that it was best for me to leave the villa. I regret that I didn't conduct myself in the right way and, as a 20 year old guy, it's something I know I will take on board and learn from. I really enjoyed my time in the villa and look forward to catching up with everyone on the outside."

I reached out to the Love Island rep for more info on the matter, but they tell me there's no further comment beyond what has already been said. While it didn't seem that any particular rule breaking went down in yesterday's episode, it's more than likely that more will be addressed when the show airs tonight or in another episode during the week.

However, there is the possibility that viewers will never know, as was the case when Rodrigo Alves was removed from Celebrity Big Brother last year after being in the house for a week. And when Niall Aslam left Love Island for "personal reasons" last series, the details surrounding his exit weren't discussed until he issued a statement via his Instagram a few weeks later.

While it hasn't been stated exactly when Sherif broke the rules, it could have happened this weekend, especially since Kem revealed on Monday's This Morning that the islanders are given a day off on Saturday while the production team clean the villa. As Kem told a shocked Holly Willoughby and Philip Schofield, the islanders "take their mics off and normally they had to the beach, and just chill out." He continued:

"What happens is, when you take your mics off, you're not allowed to talk about anything to do with the show, or the couples. You've got to talk about home life... you're being watched like a hawk — the producers — because they don't want you to talk about what's going on."

So could Sherif have broken that rule? Who knows — we'll just have to wait and see. In the meantime, viewers have already taken to Twitter to hilariously react to the news, so at least there's that.

More like this
Molly-Mae Hague & Tommy Fury Celebrate Pregnancy Reveal In The Sweetest Way
By Sophie McEvoy and Sam Ramsden
Wait, Is Maya Jama Confirmed To Host 'Love Island'?
By Sophie McEvoy
What Exactly Is The Bish & Chips Show?
By Frances Stewart
How To Get Tickets To 'Strictly Come Dancing's Live Tour
By Sophie McEvoy
Get The Very Best Of Bustle/UK