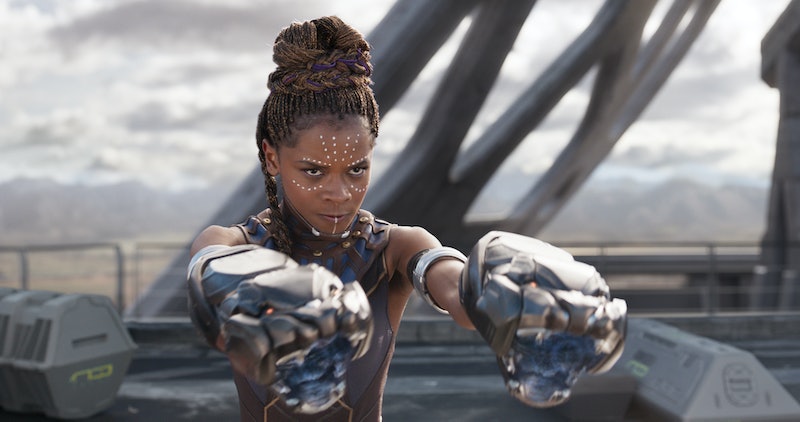 The Marvel Cinematic Universe is still awaiting its first female-led superhero movie, as Captain Marvel, starring Brie Larson, doesn't premiere until March 2019. Sure, there have been some pretty awesome female characters in Marvel movies, from the super spy Black Widow to the mighty Valkyrie, but if there's one thing the MCU needs, it's more movies where a woman is the lead, not just a supporting figure. And thanks to Black Panther, we might have just met our next potential female protagonist in Shuri, T'Challa's brainy, brave little sister. Her tech knowledge combined with her utterly charming personality makes her a fan favorite, but it also makes Shuri a perfect candidate to become the next Iron Man.

Shuri, played by Letitia Wright, has been a breakout star of Black Panther since the movie opened on Feb. 16. The little sister of T'Challa, Shuri might technically be a Disney Princess, but she's one of the smartest and most active princesses in movie and comics history. As head of the Wakandan Design Group, Shuri is in charge of all of the African country's inventions that utilize the valuable mystical element Vibranium. Fans love her for her expert comedic timing and her super charismatic persona, and she's easily going to become an absolute star in the MCU.

As the Twitter love for Shuri points out, she's not just beloved because she's hilarious (and she is that), but because she's also a genius who finds ways to improve the world with her tech knowledge. And for young women, particularly young women of color, who are thinking about going into STEM fields, Shuri is a great role model. This expertise in technology connects Shuri to another Marvel genius, Tony Stark. But unlike Stark, who initially started out using his brainpower to make weapons, Shuri uses her abilities and knowledge to make Wakanda better, to help her people, and support the Black Panther. Sure, Stark eventually had a change of heart, and now uses his tech to fight evil, but Shuri starts out being amazing, empathetic, and innovative.

It all makes Shuri an excellent candidate to become the next Iron Man, or Iron Woman, as it were. Let's face it, the original cast of Avengers that started out the MCU aren't going to stick around forever. Each actor has only so much willingness to keep appearing in these movies, however lucrative their deals are, and most have only signed on for a certain number of movies. And even comics are constantly introducing new alter egos behind the symbolic masks of many superheroes. There's already rumor that either Sam Wilson, AKA The Falcon, or Bucky Barnes are going to take up the shield and become the new Captain America if Chris Evans heads out. And the movies already introduced a seemingly "new" version of the Avengers in the form of Scarlet Witch, War Machine, Vision, and Falcon, so there's evidence that the MCU is going to have a rotating cast of superheroes coming and going.

So it makes sense that Shuri could take the Iron Man mantle eventually. And as it turns out, the comics already have set a precedent for a woman of color taking on the role. In 2016, Marvel Comics introduced Riri Williams, a 15-year-old MIT student who builds her own Iron suit out of parts discarded by Stark Industries. It's totally possible that in Infinity War, Shuri and Tony Stark will interact and she'll have some hilarious snark to add about his suit and inventions. And when Stark decides he's gotten a little old for all of the avenging, Shuri might take over his work, improve upon it, and be an even better version of the character (you know, one without the womanizing, weapon-making history.)

But even if Shuri doesn't become the next Iron Man, she definitely has potential to become the next Black Panther. Though Wakanda seems to be a country that follows a lineage of patriarchal inheritance, the creator of the character, writer Reginald Hudlin, believes that Shuri could definitely rule Wakanda. As he told Vulture, he thought that a royal family, like T'Challa's, would always have more than one child, and that he wanted the second in line to be female.

Either way, as Iron Woman or as Black Panther, seeing more of Wright as Shuri is a wi- win situation for fans. It sets a great example for young women of color who are interested in STEM, and is just an all-around uplifting addition to the many, many Marvel movies to come.

More like this
Twitter Is Overjoyed By Angela Bassett’s Record-Making Oscar Nomination
By Maxine Harrison
Kukulkan From 'Wakanda Forever' Has A Surprising Connection To Marvel History
By Grace Wehniainen
Rupert Grint Just Shared A *Major* Update About Ron Weasley’s Future
By El Hunt
Anne Hathaway Shared A "Thrilling" 'Princess Diaries 3' Update
By Darshita Goyal
Get Even More From Bustle — Sign Up For The Newsletter
From hair trends to relationship advice, our daily newsletter has everything you need to sound like a person who’s on TikTok, even if you aren’t.