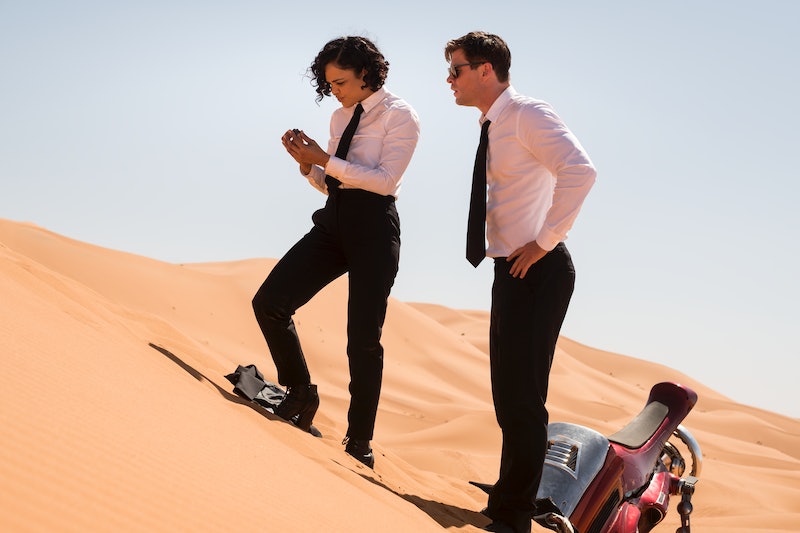 A brand new duo is taking the lead in the Men in Black film franchise when Men in Black: International hits theaters on June 14. The movie stars Tessa Thompson as Agent M, the latest member of the secret organization, and Chris Hemsworth as her partner Agent H. We follow the dapperly-dressed duo as they set out on a mission to save the world from a terrifying, earthbound threat: a mole in the agency itself. While the new movie does nod to the history of the franchise, you shouldn't expect to see Will Smith in Men in Black: International, nor his costar from the first three films, Tommy Lee Jones.

Smith has been one of the faces of the movie series since he played the iconic role of Jay a.k.a. Agent J for the original film, which premiered in 1997. But for the fourth installment to the franchise, he won't be joining the cast in a starring role, and there hasn't been any hint in the trailers that either he nor Jay's partner Agent K (Jones) will make an appearance.

But the new film still pays homage to its predecessors. The trailer features a heroic portrait of Agents J and K's cockroach conquest hanging on the agency wall, and Emma Thompson reprises her role as Agent O from Men in Black 3. (You'll also see Frank the Pug and a few other Easter eggs.) So MIB: International exists in the same universe as the first three movies, and you can probably assume and Thompson and Hemsworth's characters know all about J and K. "We went into the project knowing the deep affection we and the fans have for Will and Tommy," director F. Gary Gray told Entertainment Weekly. “We’re not replacing them, simply adding to their team."

Neither of the original stars have commented on the new film, but maybe they will once it's released. As it stands, their arc was already resolved in MIB 3. "When we finished the third, we did all talk about the fact that we that we didn't feel there was another film," MIB producer Laurie MacDonald told Variety. "It was actually in different terms: so we all talked about it feeling very complete, that somehow because the third dealt with the mystery of Will's father, it felt emotionally complete."

And really, the point of the spinoff is to show the bigger picture beyond Smith's character, and beyond defending just the U.S. (and its alien residents) from extraterrestrial activity. It establishes that the organization is much bigger than the original trilogy makes it seem. As Hemsworth tweeted back in December, "You thought MIB started in NYC? Guess again, there’s a whole international branch. The world is bigger than you thought!!" In fact, Hemsworth later tweeted that the crew shot their epic journey not only in London and New York, but also Italy and Morocco — with the movie's production living up to the "international" in its title.

So, no, we may not be seeing Agents J and K back in action, but it looks like the world is in good hands with Agents M and H.