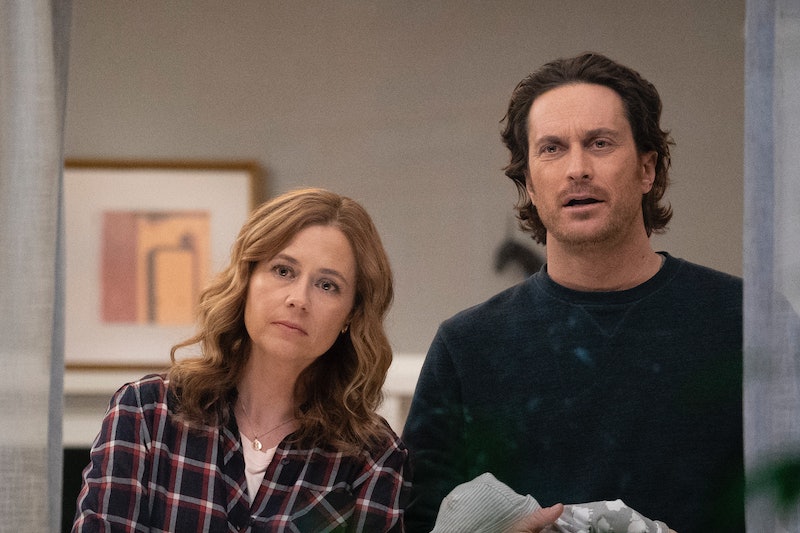 It's good that Lena and Martin have finally figured out how to be together, because their story may be coming to a close. Though it's been pretty delightful to watch their will they, won't they romance, a Splitting Up Together Season 3 is looking less and less likely. We don't know for sure just yet — according to TV Line, any renewal or cancelation news should arrive by mid-May — but things aren't exactly looking up.

Per TV Line, the Jenna Fischer and Oliver Hudson-led series is "ABC’s lowest-rated non-Friday sitcom," with the second-smallest viewership. TVSeriesFinale reported that the ratings have also dropped 36 percent since Season 1, meaning it's not retaining what audience it did already have. In fact, it's actually lost about a million viewers since Season 2 premiered.

The show is also tying up a lot of loose ends for its characters. Maya had her baby boy and reunited with her "Country Music Face aka Sugar Beard" boyfriend. Lisa Apple and Martin have come to an understanding about co-parenting their daughter, and Lena and Martin are back together and weathering anything that comes their way.

At the end of the penultimate episode, Lena told Martin, "It's been a lot ... but we're gonna make it through" and Martin responded, "We sure are." That certainly sounds like they're gearing up for a series finale, no?

Solving the "will they, won't they" in Season 2 doesn't leave much left for a potential Season 3 to explore. In fact, while doing press for the first season, Hudson told Collider that he didn't want them to get back together specifically because, "I want this show to continue on."

That being said, dedicated fans have saved many a struggling show from cancellation, so hope is not entirely lost. Currently, the TV Line poll about whether ABC should keep or cancel Splitting Up Together has 81 percent voting to keep it. And if the show is renewed, there are several storylines it could pursue outside of Lena and Martin's marriage, such as Maya's new parenting or Martin and Lisa's co-parenting. Plus, some seeds have even been planted that Lena isn't totally loving having Lisa Apple so involved in their lives. So, if Martin and Lisa get closer in Season 3, there's definitely room for another breakup to further the storyline. Since Season 2 aired in October, it's possible that a Season 3 would also air in the fall of 2019.

However, if the show isn't renewed for Season 3, at least fans can expect some resolution for the characters in the finale. The fact that everyone is in a pretty good place right now is sweet, and it would leave viewers on a good note. Fischer recently told Brit & Co that she just wanted Martin and Lena to find a way to be there for their family, whether together or separate, and based on Season 2's penultimate episode, it seems like they've done that. So, if nothing else, at least fans could get the ending that they, and the show's stars, deserve.