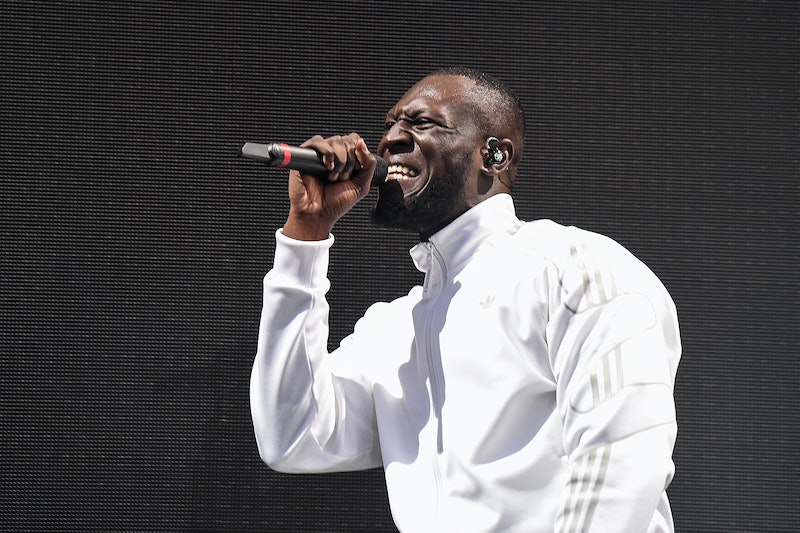 The 2019 Glastonbury weekend is now in full swing, and those lucky enough to be attending this year's festival are looking forward to a stellar headliner lineup that includes The Killers, The Cure and Stormzy. As usual, the details of each major set have so far been kept under-wraps, but what can we expect from this year's headliner performances? And will Stormzy bring any guests out at Glastonbury?

Well, so far nothing has been announced in regards to any guest appearances throughout Stormzy's upcoming Glasto set — although, given that most headliners traditionally keep most details of their performances a secret beforehand, this is hardly surprising. However, I have reached out to Stormzy's representatives for comment, and will update with any new information once it becomes available.

Even though details surrounding Stormzy's headliner performance are pretty scarce, that hasn't stopped speculation of what might go down, and fellow grime artist Ghetts has shared his thoughts on what people can expect from the Brit Award-winner this weekend. Speaking to the BBC, Ghetts said, "I think it's going to be amazing. I think it's going to be a shut-down. It's probably the most energy that Glastonbury has ever seen. I know that sounds like a big statement but, trust me, it's going to be crazy."

Fellow Glastonbury performer, Stefflon Don, who is set to perform in the famous John Peel tent on Sunday, June 30, has also described Stormzy's upcoming performance as being a "moment in history." Speaking to the BBC, she said, "It's like a moment in history. Stormzy always brings it with his live shows and I can't wait to see what he brings to the Pyramid stage. I think and hope it will go down as one of the most memorable, iconic Glasto performances."

According to iNews, Stormzy's Glastonbury 2019 set will take place at 10.15 p.m. on Friday, June 28 — and the BBC are planning to broadcast his performance completely live and uncensored, despite concerns the "Vossi Bop" rapper might use offensive language towards the government and Conservative Party leadership contender Boris Johnson. However, the BBC don't appear to be worried, primarily because the performance will be taking place after the 9 p.m. watershed. Speaking about the concerns, a BBC spokesman told iNews, "Stormzy’s set on Friday night at Glastonbury will be broadcast live on BBC2 post-watershed with the appropriate language warnings, in accordance with the BBC’s editorial guidelines."

One Stormzy fan very much looking forward to his first major Glastonbury debut is Radio presenter Julie Adenuga, who recently expressed her joy at his presence on the headliner line-up. During an interview with the Independent, she said "it’s gonna be sick!," and went on to add, "It’s about what he’s achieved, about the fact he’s done enough for the organisers of Glastonbury to want him to headline. I’m sure he knows what it means to the people that matter, anyone else can go see another act if they don’t like him. But there are so many of us that think this means the world and that’s what matters."