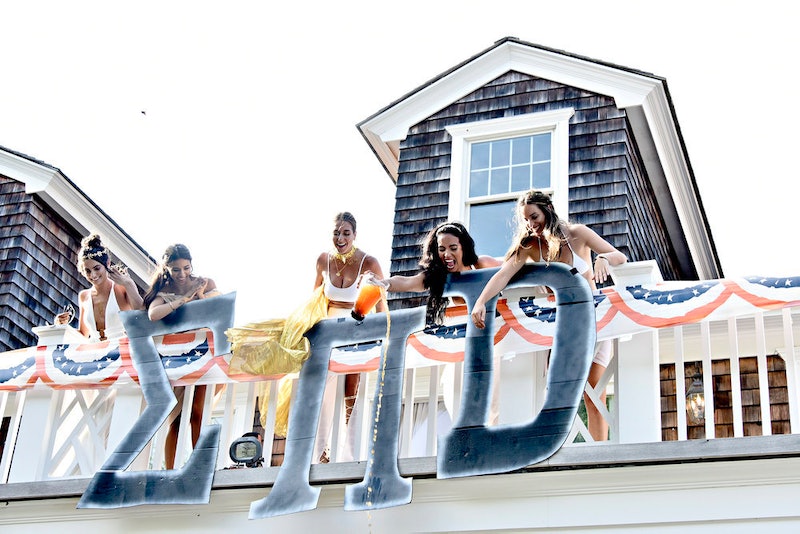 A number of TV shows have been forced to halt production due to the COVID-19 pandemic, but Summer House Season 5 may be on pause for a full year. Though the show hasn't been officially renewed, it obviously films during the summer months, and right now, it seems unlikely that the cast will be able to ship off to the Hamptons any time soon.

"[Season 5] has not been greenlit yet, at all," producer Ian Gelfand told Kate Casey on her podcast Reality Life with Kate Casey earlier this month. "Like is there some talk? There's some talk. But nothing's been greenlit." He added that he thinks this was "the best season of Summer House yet" and that they've hit some ratings milestones, so he's hopeful the show will be able to return eventually. (Bravo has yet to respond to Bustle's request for additional comment.)

Summer House star Kyle Cooke and his fiancée Amanda Batula are also optimistic...so much so that they're coming up with their own ideas about how to making filming work. "It's like, let's do this Big Brother-style. Let's just throw us all in the house," Batula told Entertainment Tonight. Added Cooke: "If there is one show on Bravo that can actually pull off a quarantine-based show, it's probably Quarantine House. We could film Season 5 in, like, three weeks."

If Season 5 does come to fruition, Batula would like to see some (minor) changes. "I would love for maybe not the [cast] to change as much as, like, the actual house," Batula said. "We've explored every nook and cranny, if you know what I mean," Cooke added.

Their wish may be granted, because the house they typically stay in is currently on the market, and recently underwent a $100,000 price cut. A new house could offer a fresh start...even if that fresh start doesn't come until 2021.