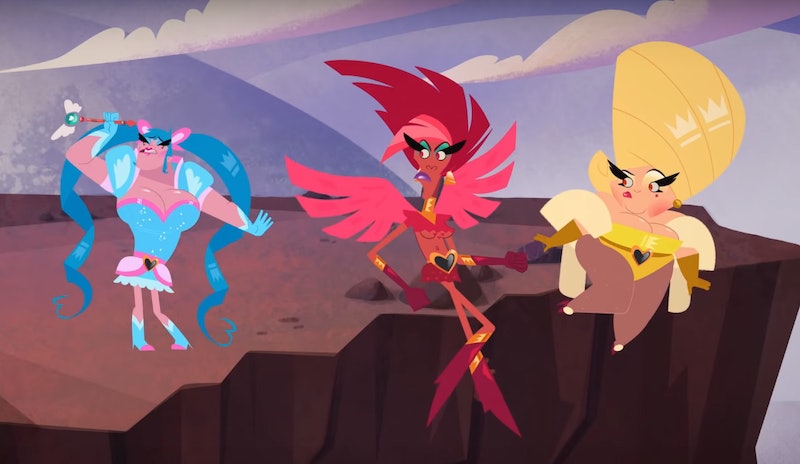 Halleloo — Netflix's new animated series, Super Drags, which premieres with Season 1 on Nov. 9 — is about a bunch of superhero drag queens coming to save the world. The series was made in Brazil, but the the dubbed English language version features some extremely well-known Rupaul's Drag Race alumna: Trixie Mattel, Shangela Laquifa Wadley, Ginger Minj, and Willam Belli. The world needs a lot of saving these days, so here's to hoping that Super Drags will be back for Season 2.

At the moment, it's a little too soon to tell if Netflix will renew Super Drags. There likely won't be news about that until the streaming service has collected enough viewership information to decide whether or not its worth bringing the colorful cartoon heroines back for another round of adventures. It's difficult to predict when Netflix might announce the news of an official renewal, so just be sure to keep your eyes on the Super Drags Twitter and Instagram feeds for the latest updates.

Even if Netflix does want to bring Champagne, Scarlet, and Lemon back for Season 2, does that mean they'll be able to? The American version of Super Drags boasts some of the hottest stars currently working in drag today. Hopefully, they'll be able to keep their schedules free enough to film another season?

For example, Shangela and Trixie already committed to the hour-long RuPaul’s Drag Race Holi-slay Spectacular, which will air in December. In addition, Shangela told Bustle back in March that she had a comedy tour in the works entitled Shangela is Shook, which has already toured all over the UK and Australia. According to her website, Shangela has nearly non-stop shows scheduled until the end of 2018 on four different continents.

Trixie Mattel also has multiple concert dates listed on Songkick for February and March 2019, when she'll be touring around the UK. In addition, she's also currently in her third season of UNHhhh, which airs on Wednesday nights on WOW Presents (and is then rereleased on YouTube) with Katya Zamolodchikova. UNHhhh was actually the predecessor to their Viceland series, The Trixie & Katya Show, which ran for one season from January to March 2018. Now they've returned to their roots and aren't showing signs of slowing down their growing small screen careers any time soon.

Trixie and Shangela aren't the only Super Drags who've been busy. Ginger Minj talked to Billboard at NYC Drag Con in September 2018. She explained that she's recently filmed a movie called Dumplin' with Jennifer Aniston and Dolly Parton, which will be released on Netflix on Dec. 7. In addition, her album Clownfucker is also due out this December. And — my particular favorite Minj update — there is a fairly active internet petition to cast Ginger Minj as Ursula in Disney's live action Little Mermaid. The sky truly is the limit for this glamour toad.

Last but not least, Willam, who you might remember from her abrupt exit from Drag Race Season 4, voices the Super Drags villain, Lady Eliza. In an interview with Billboard, she explained how excited she is that drag is finally becoming an important part of mainstream pop culture, and just how busy that's keeping her. "I get so excited that this drag zeitgeist is happening and I get to be a part of it," she said. "And not a small part of it right now, 'cause I'm on two different Netflix shows ... Super Drags [and] EastSiders ... It's cool that drag is being seen and being talked about now I think."

Right now is the perfect time for a colorful cartoon comedy about drag super heroes who happen to be played by some of the biggest drag stars. The only question now is, will Super Drags be able to keep its stars from flying away?