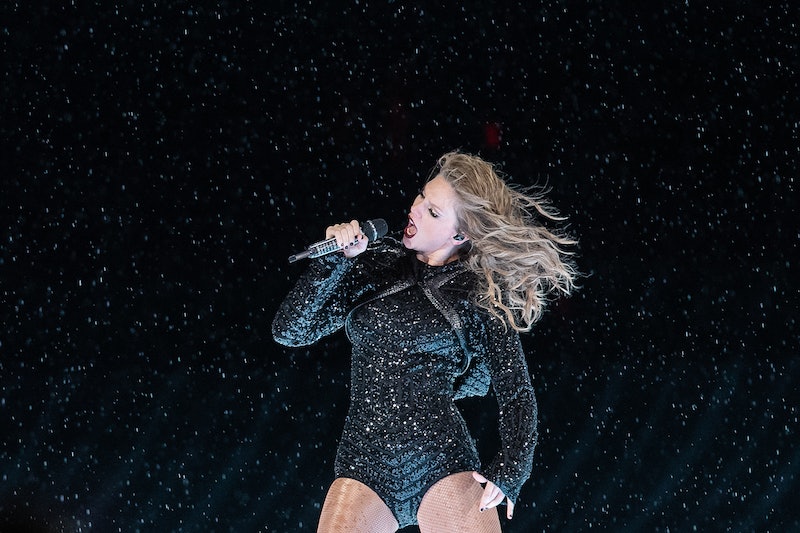 Taylor Swift's album cycles come and go so quickly, but the music really stays with you. Swift whips the world up into a frenzy with new material every few years or so, and that hype is maintained between album releases. That means her fans are constantly craving a tour, hoping to see all the songs that have soundtracked the previous few years played live by the person who made them. It already seems like it's been a little while since Swift toured Europe. So, will Taylor Swift tour the UK in 2019?

Swift's last show over here was on June 23, 2018, according to Setlist.fm, when she played Wembley Stadium as part of her Reputation tour. While she sprinkled in some old Swifty classics into her Wembley repertoire, she mostly stuck to songs from her sixth full-length album. Now fans (myself included) are looking forward to a tour in which Swift showcases more of her incredible and varied back catalogue.

It's likely that Swift is still resting up after her behemothic Reputation world tour, and, as such, the pop icon doesn't currently have any dates listed on her official site. However, you can sign up to notifications from Songkick to hear if and when that changes.

In the meantime, I reckon the next best place to keep an eye on is the Glastonbury Festival lineup. Stormzy's already filled one of the headliner slots (as the festival announced on Nov. 15, 2018), so that means two remain. Quite a lot of pundits reckon that Swift's very much in the running for one of them.

The Independent put Swift on their list of headliner contenders in Dec. 19, 2018, and she also joined the NME's roll of predictions on Sunday, Feb. 13. I think my bet's on her too. Having never performed there before, Swift's one of just a few top-tier pop artists left for Glastonbury to scoop up before they begin to repeat headliners. I reckon now's their chance to pounce.

Swift's probably more inclined than ever to accept Glastonbury's headlining slot since she got a taste for festy life when she played at BBC Radio One's Big Weekend in Swansea in May of 2018, as the BBC reported. The Telegraph fittingly deemed the Big Weekend to be the "Glastonbury Replacement," of that year, as the Somerset festival was having its quinquennial "fallow year." So, c'mon, Michael and Emily Eavis, get the Swift on your bill, so I can hear "You Belong With Me" live again.

If the suspense is just too much for you, and you need another injection of live Taylor Swift stat, then I very much recommend watching her Reputation Stadium Tour Netflix special if you haven't already. It should provide the Glastonbury organisers with enough evidence that TSwift truly is one of the greatest live acts in the world, and more than worthy of a spot at their festival. Keep rewatching the Netflix special and replaying all the bops, and don't worry too much — Swifty will be back around before you know it. So, just shake it off.