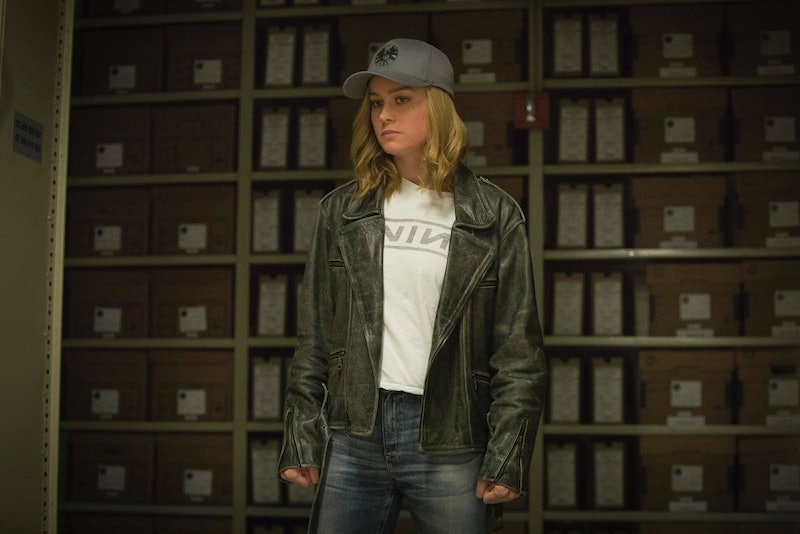 The moment many Marvel fans have been waiting for has come. The Captain Marvel trailer is finally here, and it's putting a brand new spin on the Marvel Cinematic Universe. The trailer features Brie Larson in the lead role of Carol Danvers, aka Captain Marvel, and shows her as a mysterious being, coming from above, and joining in whatever crisis is happening on Earth. It's the next movie to come out of the MCU following the dramatic Avengers: Infinity War and Ant-Man and the Wasp, but will The Avengers be in Captain Marvel? While there will be some familiar faces in Captain Marvel, fans shouldn't expect any members of The Avengers to show up this time around.

In an ending that had all Marvel fans on the floor back in April, Infinity War killed off all the characters audience members thought would be saved. T’Challa and Spider-Man both had sequel solo films coming up and — poof — they were gone. Along with other fan favorites like Bucky and Groot, The Avengers are at a huge loss. Then came Ant-Man and the Wasp and fans weren’t sure of how that would fit into the timeline (considering all of his crew was going to be in the film). But fans were, again, rudely awakened by one of the after-credits scenes Marvel is so famous for. They last left off with Hope van Dyne, and her parents on a roof, ultimately falling to the same fate as half of the rest of The Avengers: turning to dust. And poor Scott Lang is falling through the Quantum Realm, with no outside help in sight.

Another reason why The Avengers won’t be in Captain Marvel is because they don’t exist yet. Well, The Avengers as we know them don’t exist yet. That’s because this new movie is actually taking place in the 1990s. That’s right, the 90s, home to VHS tapes, frosted tips, and pagers. And apparently Nick Fury with hair. Due to this, none of the devastating events from the last 20 Marvel movies have happened yet. Tony Stark is alive, but he’s a young adult in the 90s, and as we find out in Captain America: Winter Soldier, his parents died in December of 1991. So odds are he’s dealing with that tragedy in his life.

Captain America is still under ice, not to be found until the 2010s and then that’s when Steve Rogers finally wakes up. Thor hasn't come to Earth yet and Bruce Banner is a regular guy with no ability to turn into The Hulk at a moments notice. In the 90s, he's in the middle of obtaining one of his seven PhD's, and doesn't turn into the green guy until after college, if we're going by the timeline of the Edward Norton solo film.

Another character fans have seen before that's returning to Captain Marvel, is Ronan the Accuser, who is in the first Guardians of the Galaxy, will be in Captain Marvel in a presumably big role. Considering Carol Danvers is part Kree (which is what Ronan is), there is bound to be an interesting dynamic.

S.H.I.E.L.D. does exist in the 90s — as it was created right after World War II — and fans can see that more clearly with both Nick Fury and Phil Coulson in the trailer for Captain Marvel. There are no other familiar faces in the film, according the its IMDB page, although there is room for fan-favorite Peggy Carter to show (since she is still alive at this time and also a founding member of S.H.I.E.L.D.), although that's never been confirmed.

Even though The Avengers as fans have come to love, may never be the same again, a new face like Captain Marvel is not only going to add to the extensive MCU, but it's also what's going to save their butts in the end. Can March hurry up already?