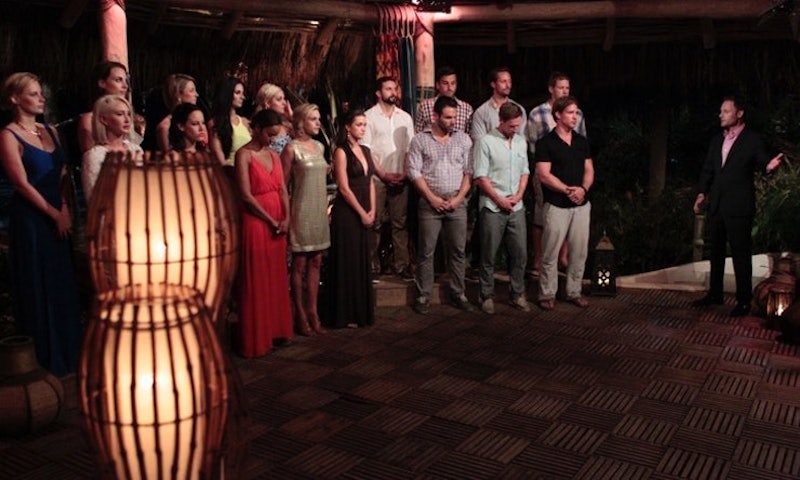 Shocking news regarding the Bachelor franchise broke on Sunday. Bachelor In Paradise has suspended filming indefinitely amid allegations of misconduct. Many of the details leading to the halt are still being reported, and it's also unclear if the Bachelor in Paradise will still premiere on August 8, or what the incident will mean for the future of the other series in the franchise, like The Bachelorette and The Bachelor. Bustle has reached out to ABC for comment on whether the other shows will be affected, but did not receive a response at the time of publication; Warner Bros. sent the same statement that can be read below.

Earlier: While Warner Bros. did not share specifics, the company released a statement on Sunday regarding production being halted. "We have become aware of allegations of misconduct on the set of Bachelor in Paradise in Mexico," Warner Bros. said in a statement released to The Hollywood Reporter. "We have suspended production and we are conducting a thorough investigation of these allegations. Once the investigation is complete, we will take appropriate responsive action.”

On Monday, People magazine reported that filming of the series was suspended after an alleged sexual encounter between DeMario Jackson and an unnamed female contestant, who allegedly may have been too drunk to give consent. Some reports have claimed the female contestant involved was Corinne Olympios. Bustle reached out to Jackson and Olympios for comment, but did not receive a response at the time of publication.

"Everyone is just going about their business. Cameras are rolling. Producers are everywhere. That's when a 'third party' felt uncomfortable, claiming misconduct in the workplace. As of right now, production of Paradise is suspended indefinitely, and they are sending everyone home and telling everyone else to stay home. DeMario and Corinne got sent home soon after."

At this point, ABC nor Warner Bros. have commented on how or if this situation could affect the other series. For now, the investigation is underway, so fans will have to wait and see if an announcement is made at a later date.