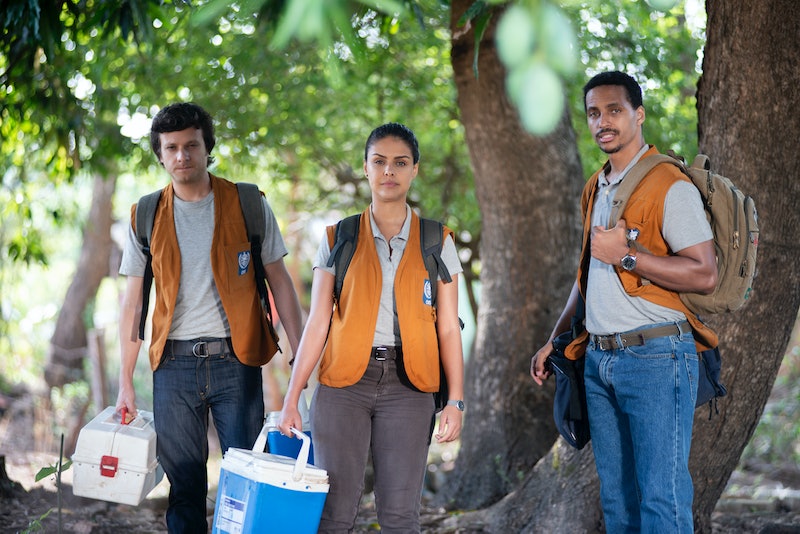 Premiering June 28, Netflix's The Chosen One follows three doctors who travel to Aguazul, a remote village in the Pantanal. They're there to vaccinate residents against a new mutation of the Zika virus, but their help is refused, and they soon find themselves trapped in the isolated community. As the doctors uncover more secrets about the village, and learn more about the enigmatic leader running it, they're forced to confront their beliefs about faith vs. science. It's a big theme to tackle, and how well it's executed will be a key factor in determining if The Chosen One will return for Season 2.

There's not a ton of info yet about the new show, but the Chosen One's trailer teases a bit more of the tension to come between these two very different groups. In it, the doctors try to reach out to the local medical professional in Aguazul to see if the virus has affected their people. They receive no response, so they travel to the remote location to make sure everything is OK. As they walk through a mostly abandoned street, a Brazilian sign is show that reads "medicine means death," and one man shuts his doors when they call out to him. Suddenly, the trio realizes they are surrounded by a horde of the village's residents, and they're chased back to the dock where they left their boat.

Afterward, the doctors speak to a man who is presumably in charge and he tells them that no one ever gets sick there, so they can go ahead and leave. One of the doctors counters by saying that the vaccination has been mandated by the government, and that's when they start to realize something fishy is going on. One of the residents accidentally says something about "the chosen one," and after some more digging, the doctors stumble upon a ceremony led by a man in a white, hooded robe,.

It's clear the Aguazul villagers worship him: they're seen kneeling around him in prayer, chanting "Blessed be the chosen one. Blessed may he be." But the more the doctors question what's going on, the worse things get for them. A resident accuses the doctors of being sent there to make them sick, and things unfurl into a chaotic blur of weird masks, gunfire, and gasps. Eventually, the doctors come face to face with the "chosen one." "That's our difference," he tells them ominously. "Science is always in doubt. Faith is certain."

Will the residents force the doctors out of town, or worse, kill them? Or will they cave under pressure and take the vaccine? And who is this chosen one, exactly? Is this a cult, or a legitimate religion? The show seems to be half mystery thriller, half pointed debate, raising inevitable questions about faith, medicine, and the real-time debate around vaccinations. That's a lot to pack into one show, so it could either be brilliant...or a total disaster. Which of the two will largely determine whether or not Chosen One comes back for Season 2.