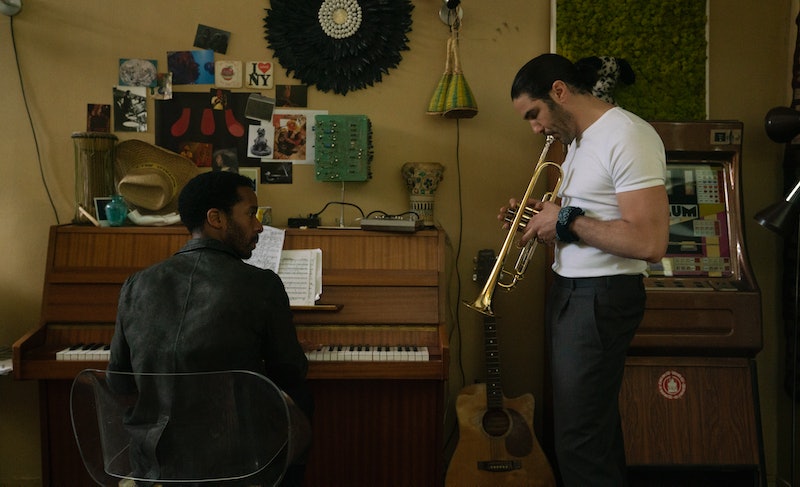 After his success with jazz-centric films Whiplash and La La Land, Damien Chazelle is trying his hand at TV. His new Netflix series, The Eddy, follows Elliot Udo (André Holland), an American expat and owner of a struggling jazz club in present-day Paris. It's too soon to tell whether The Eddy will return for Season 2, but it's taken a long time to get this production to the screen.

The Eddy began to take shape in 2013, according to Vanity Fair, when the show's future producer, Alan Poul, met up with composer Glen Ballard, who'd written a collection of unreleased jazz standards. "I wrote a song called 'The Eddy' that encapsulates the concept of a place where great musicians have a sanctuary and have an intimate audience, and they all come together in these transcendent moments," Ballard, who co-wrote Alanis Morissette's Jagged Little Pill, told the Financial Times.

The two began to brainstorm a TV show that could coincide with the modern jazz music Ballard had written. Then, Poul saw Chazelle's 2014 film Whiplash, which he told the Financial Times made his jaw drop. "I thought it was extraordinary, as everyone else did," he said, deciding the director would be the perfect addition to the team.

From there, screenwriter Jack Thorne was brought on board to conceive the story, whom Ballard told the Financial Times "did something magical" with his music, creating "a dense matrix of characters all converging on the club."

But although The Eddy storyline was now written, their work had just begun. They still had to cast everyone. "The hardest and most time-consuming thing was finding the band," Poul told Vanity Fair. "First, we had to find musicians who could meet Glen Ballard's very, very high standards of jazz musicianship. Then they had to play together, like a tight-knit band, over the course of a month. And then: Who had a screen presence?" Then there was the fact that these musicians weren't trained actors, so Poul explained that they weren't able to audition with scenes. "It was a very arduous task," he said.

Fortunately, their hard work paid off — specifically when it came to drummer Lada Obradovic, whose discovery Poul called "the triple jackpot." He continued in his VF interview, saying, "the [band's] drummer was always envisioned as a woman from Eastern Europe with a unique look. The fact that we found a genius Croatian drummer with a very specific sense of personal style — that's her persona."

Ballard echoed these sentiments in his Financial Times interview. "We were lucky to find a band as multicultural as the city," the composer said. "Our bass player is Cuban, our drummer is Croatian, our singer is Polish, our sax player's from Haiti, our trumpet player from France. So it's a truly international band, but the common language is this music."

So if Netflix decides to move forward with a second season of The Eddy, fortunately, they've already cast their intimidating group of jazz musicians. Now, they just need more music.

More like this
Ashton Kutcher Wants Danny Masterson “To Be Found Innocent” In Rape Retrial
By Jake Viswanath
All The ’70s Easter Eggs You Missed In 'That ’90s Show'
By Grace Wehniainen
At 28, Debra Jo Rupp Was Living A Much Different '70s Show
By Grace Wehniainen
Here’s Everything Coming To & Leaving Netflix In February
By Jake Viswanath
Get Even More From Bustle — Sign Up For The Newsletter
From hair trends to relationship advice, our daily newsletter has everything you need to sound like a person who’s on TikTok, even if you aren’t.