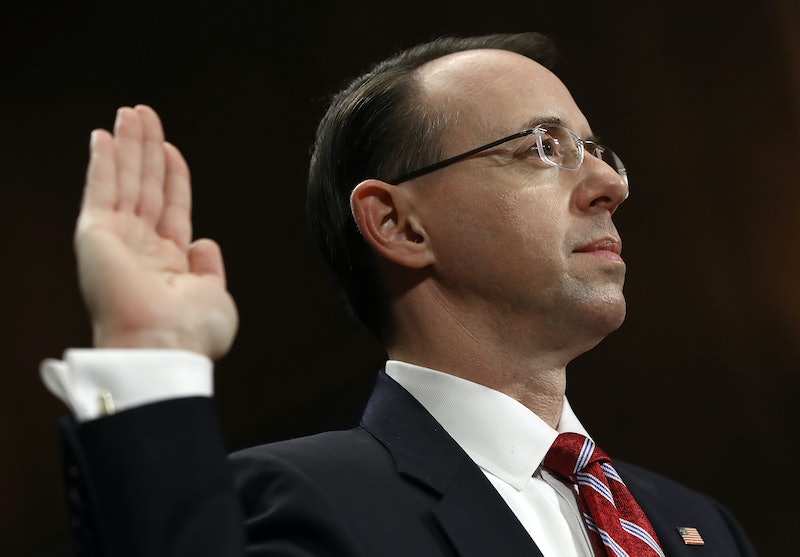 An independent investigation into the connection between the Trump campaign and Russian officials has been on the Democrats' wish list for a while now. Even some Republicans have voiced support for an independent prosecutor who would pursue the inquiry on a non-partisan footing. But that's yet to happen, and even more questions are being raised now the person in charge of the FBI investigation, Director James Comey, has been sacked by President Trump.

So, what happens to the FBI's investigation into Trump's Russia ties? The possibility of an independent investigation now falls onto the shoulders of one man: Deputy Attorney General Rod Rosenstein.

As things stand, Rosenstein is the only person who can appoint a special prosecutor to continue the investigation and bring charges if there's any basis for them. That's because Attorney General Jeff Sessions recused himself from the Russia investigation because of potential conflicts of interest, after he denied any contact with the Russians during his confirmation hearings (when he had, in fact, met with the ambassador).

Therefore, Rosenstein would be the official in charge of making the call, — which is a bit ironic since he was the one who recommended that Comey be fired. He wrote in a letter:

The FBI is unlikely to regain public and congressional trust until it has a Director who understands the gravity of the mistakes and pledges never to repeat them. Having refused to admit his errors, the Director cannot be expected to implement the necessary corrective actions.

What's even more unbelievable is that Sessions was involved in suggesting that Comey be fired, considering he did recuse himself from the investigation into the Trump campaign's link to high-ranking Russian officials — an investigation that Comey was overseeing. His letter doesn't include reasons beyond those laid out by Rosenstein, but he did note, "I have concluded that a fresh start is needed at the leadership of the FBI."

Ironically, the very problems that Rosenstein saw in Comey (namely, the inability to regain public trust in the FBI) will now be far worse without him, given the timing of his dismissal. A special prosecutor could change that, though. It would show that Rosenstein is, in fact, working for the Justice Department's good and not solely for Trump, who appointed him as deputy AG from his prior position as a federal prosecutor under the Obama administration.

The president's decision to act on Rosenstein's recommendation shocked many in Washington, but appointing a special prosecutor to look into the Trump-Russia collusion is an obvious solution to easing the tension somewhat. Democrats have reiterated their calls for it, and some Republicans seem to be warming up to the idea, too.

Sen. Chuck Schumer laid out his thinking very clearly. "Deputy Attorney General Rosenstein sat in the judiciary committee and promised to appoint a special prosecutor at the appropriate time," Schumer said. "That time is right now. The American people's trust in the criminal justice system is in Mr. Rosenstein's hands."

Republican Sen. Richard Burr said he was "troubled by the timing and reasoning of Director Comey's termination," adding that it would make the investigation in the Senate more difficult.

Rosenstein, it seems, is the only one who's in a position to fix this huge mistake.