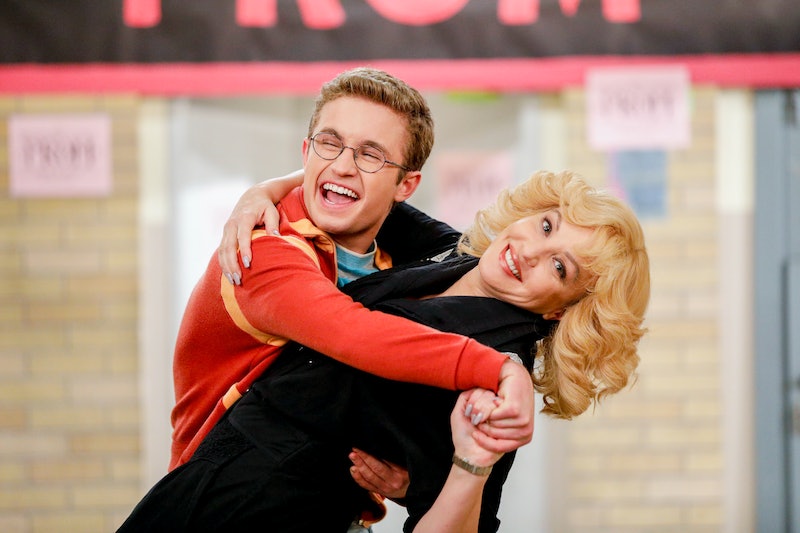 Update: The Goldbergs has been renewed for Season 8.

Earlier: After seven successful seasons, there's good reason to believe that The Goldbergs will return for Season 8. Even the cast says they're in for more episodes, but ABC has yet to officially announce the show's renewal. Along with many other programs, the sitcom is currently dealing with the impact of coronavirus. For the safety of its staff, production was halted on March 14, per Deadline, which left them without time to film the planned season finale. As a result, the Goldberg family will be saying goodbye to Season 7 one episode early with an '80s prom-themed finale on May 13.

"It was good that we shut down, however, we did not get to film our finale for Season 7," Hayley Orrantia, who plays Erica Goldberg, told On the Red Carpet for ABC. "We are very hopeful and excited for a Season 8, which we usually would film in August," she added, suggesting that maybe the planned finale could be incorporated then.

Wendi McLendon-Covey, who plays matriarch Beverly Goldberg, hinted at the show's return on Twitter. She responded to a fan who was upset about the season's early ending. "Well, at least it's only the SEASON finale!" she wrote.

Troy Gentile, aka Barry Goldberg, also seems to think the family is in for at least one more season. “It has to go to senior year, at least for Adam,” he told TVLine in September. Adam, the youngest Goldberg kid, is a high school junior in Season 7. “It’s not for sure. You never know what’s going to happen in this crazy industry," Gentile added. "But I’m pretty confident we’re at least going to see Adam as a senior.”

Not to mention there's also the show's '90s-set spinoff Schooled, which hasn't been renewed for a third season yet, though its Season 2 order was extended from 13 to a full 22 episodes, which is a good sign. However, that series will also end prematurely with a prom-themed 21st episode airing after The Goldbergs. Still, its extension will likely bode well for its future.

Here's to hoping that both The Goldbergs and Schooled's regular filming schedules can resume at the end of summer as planned.