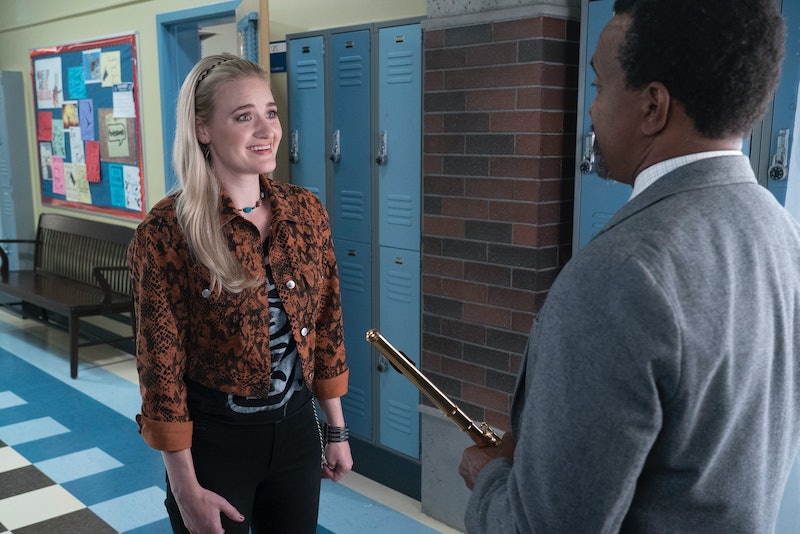 The Goldbergs may have originally teased a spinoff starring Nia Long, but the offshoot will actually follow a character Goldbergs fans have been watching for years. Premiering Jan. 9, Schooled centers on AJ Michalka's character Lainey, who's just become a music teacher at her alma mater, William Penn Academy. Back in the '80s, during which The Goldbergs is set, she's still a college dropout engaged to Barry, but Schooled will flash-forward to the '90s, where she's learning how to be an adult. The show will feature plenty of other familiar Goldberg faces, too, but Lainey will be leading the band — as long as she can shake herself from Barry in the past.

The original premise for The Goldbergs spinoff was that guidance counselor Mr. Glascott (Tim Meadows) had just become principal of William Penn. His sister Lucy (Long) joined the staff as a teacher, while her two daughters became students. The pilot aired as a special Goldbergs episode in Season 5, but as Deadline reported, it never got a series order. And while Schooled will still be set at William Penn Academy in the '90s, the plot has pivoted to focus on Lainey.

In an interview with Boston Herald, Michalka explained that she'll be narrating Schooled just as Patton Oswalt narrates The Goldbergs. And it's appropriate that she's the music teacher since, along with Lainey being in Erica's band, Michalka is also a musician in real-life, having released solo material and performed in Aly & AJ with her sister, Aly. "[Lainey is] grown up, so I'm finding out who she is in the '90s," Michalka told the Boston Herald. "But I feel so comfortable having played her for the last six seasons."

Due to her engagement to Barry, you may be wondering if Lainey is going to be Mrs. Goldberg at the school. After all, The Goldbergs' upcoming Wedding Singer-themed episode, airing on the same night as the Schooled premiere, will focus on Barry and Lainey's upcoming nuptials. But Michalka teased to TVInsider that the episode will most likely put an end to their ill-advised engagement. "We kind of wrap up the story with Barry and Lainey and transition to Schooled on that same night," Michalka said. "I think it's going to be a little heartbreaking in some ways, but I also think it's going to be one of the most exciting episodes."

As for Lainey's future on The Goldbergs now that she is leading her own show, Michalka told Boston Herald there's always a possibility that she could come back, since creator and showrunner Adam Goldberg is open to that. "Adam's always full of surprises, and characters always come back," Michalka said. "Who knows where I'll be when they're on Episode 22 of this season? I'm game to do both, as long as they want me to."

So while Lainey will probably be permanently out of Barry's life after "The Wedding Singer," you'll still see plenty of her on Schooled, where she'll be navigating the transition from former student to teacher.