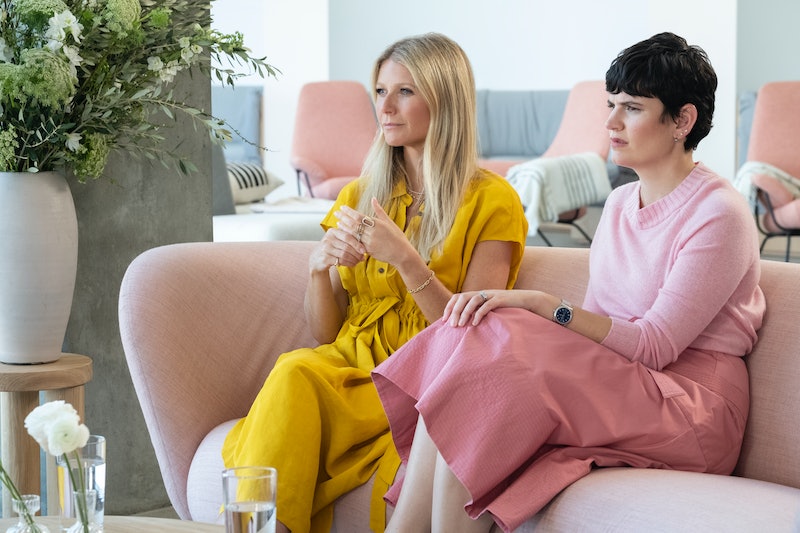 "Dangerous" and "unregulated" are among the many controversial buzzwords words sprinkled throughout the trailer for The goop Lab, along with "exorcism," "energy healing," and "psychedelics." The first season's six episodes hit Netflix on Jan. 24., and reviews are split — from "painful to watch" to "interesting and informative" — which will make for an interesting response if Netflix renews the show for Season 2. At the time of publication, an official renewal has not been announced though, so it can really go either way.

When the trailer and vagina-like promotional art surfaced on Jan. 7, the internet erupted with criticisms of the Gwyneth Paltrow-owned wellness brand. In 2018, per The New York Times, it was fined $145,000 in civil penalties for selling products that boast "unsubstantiated claims," like vaginal crystal eggs for regulated periods and a flower essence blend that reportedly prevents depression.

Now, Paltrow promises that her company has learned from its mistakes. "When we were a little startup and we didn't know about claims and regulatory issues, we made a few mistakes back in the early days," she told CNBC on Jan. 6. "But for over a year now, we've had an incredibly robust and brilliant science and regulatory team in house. We're very focused, of course, on backing up the things that we talk about with scientific claims when necessary or being able to say like, 'Hey, this is just for your entertainment.'"

Still, it's understandable for consumers to proceed with caution, and to be concerned that this new show, on a platform as big as Netflix's, could further misinform. Some people went as far as cancelling or threatening to cancel their subscriptions when they heard about its release. There's even a change.org petition that begs Netflix to cancel the show and stop giving Paltrow a platform. It has over 1,700 signatures.

In a statement to CNN Business, a spokesperson for goop responded to criticisms of the show. "It's a shame that many of the things goop discusses are considered controversial, such as female sexual health, when the goal is really to push the culture forward," the spokesperson said. "Many of the experts interviewed on The goop Lab are doctors and research scientists from leading medical institutions, which people will realize when they actually see the show on January 24."

The series is launching alongside goop's new inventory at Sephora, which include "Knock Me Out"and "Balls in the Air" chewing candies labeled as "vitamins" that reportedly help sleep patterns and support the immune system, though none of the products have been approved by the Food and Drug Administration. According to CNBC, the brand's skincare line will be sold at select North American stores beginning Feb. 28, and additional products will roll out, in-store and online, in the coming months.

So, whether or not The goop Lab Season 2 is in the brand's future, more wellness and beauty products most definitely are.

More like this
Move Over, 'Sunset'! The Drama-Filled Trailer For 'Selling The OC' Is Here
By Nola Ojomu
What That Ominous 'Selling Sunset' Season 5 Finale Could Mean For Season 6
By Orla Pentelow and Brad Witter
Here’s Everything Coming To & Leaving Netflix In July
By Grace Wehniainen
‘RHOA’s Shereé Whitfield’s Boyfriend Tyrone Gilliams Hinted He’s Single
By Brad Witter
Get Even More From Bustle — Sign Up For The Newsletter