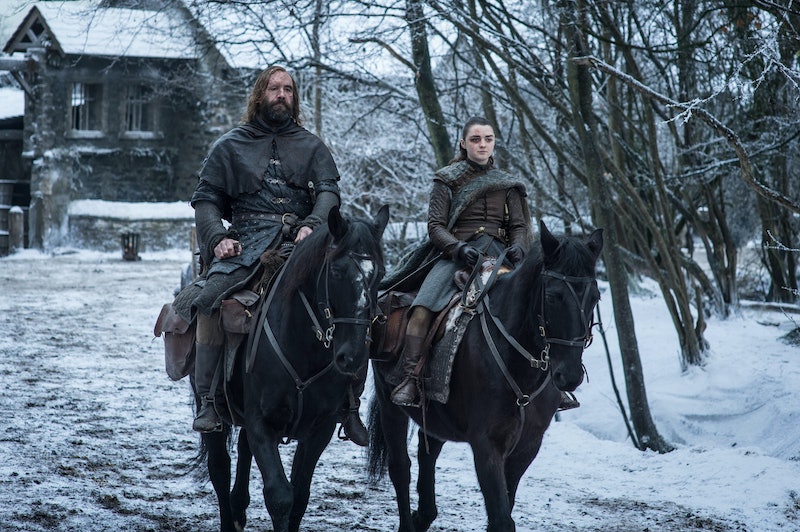 The final season of Game of Thrones is squeezing one last road trip in before the curtain closes — and this time, Arya Stark and Sandor Clegane are on a mission. Will The Hound kill The Mountain on Game of Thrones? It's all he wants, and it may finally happen. Fans have been anticipating "Cleganebowl," a duel between brothers Sandor and Gregor, for many seasons now. There was no real reason to expect it would go down, besides the fact that the Hound swore to kill the Mountain, but now it seems like this long-expected fight may be coming up soon.

In Season 8, Episode 4, Sandor "The Hound" Clegane left Winterfell to fulfill this final purpose. It's the only thing that will make him happy, he told Sansa. He's wanted this for a long time. Like Arya, who also left Winterfell with unfinished murder business, he's got a big name on his list that he's looking to check off, even if he dies trying.

How both of them plan to sneak into King's Landing and carry out their plans is maybe the biggest mystery of all. The capital is a little busy right now, with Daenerys' troops making unsuccessful attempts to overthrow Cersei's government, and Jon's army marching South as well.

That said, a sneak attack is really the best way for this final showdown to go down — rhyme unintended. Daenerys Targaryen may be ready to go all Mad Queen and burn King's Landing with Drogon's fire, but the others trying to end Cersei Lannister's reign are trying to avoid killing off innocent bystanders at all cost.

At least the Hound is not trying to kill Cersei: too many characters have that exact goal in mind at the moment, and it's bound to be a crowded fiasco. Besides Arya, Daenerys, and Jon there's also likely Greyworm and Jaime Lannister as well. While they're all doing that, the Hound may be able to take on the undead Gregor.

However, if the Hound is unable to kill the Mountain, what happens? They defeated an undead army, but this particular zombified creation has been particularly difficult to destroy. Could Arya do it instead? Surely her custom staff weapon hasn't been packed away already — it'd be cool to see a weapon like that take on the Mountain. If the Hound dies, she could take him out to honor him. It would also be fitting if Greyworm struck the fatal blow, as the Mountain carried out Cersei's sentence on Missandei.

Or, who knows, maybe that "prince from Dorne" who got name-dropped out of nowhere will show up and get the revenge on Gregor Clegane that Oberyn Martell was unable to in Season 4. Grudge keeping is a serious business in the Seven Kingdoms. There's still two episodes left in Game of Thrones — and given the rollercoaster that was "The Last of the Starks," anything can happen at any time.

Only one thing is certain: if anyone wants a shot at taking out Cersei, they're going to have to take out the Mountain first. Whether Sandor gets his wish or not, his freaky brother's time has come at last.