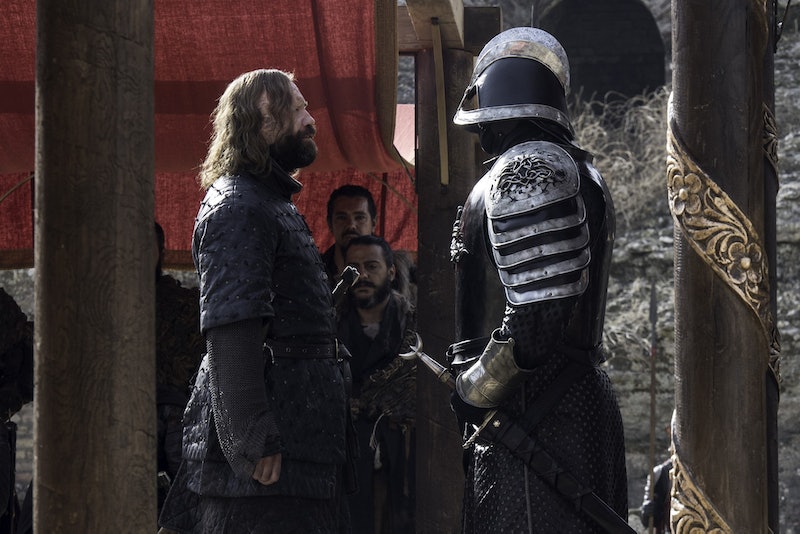 There are a lot of Game Of Thrones theories about how the show will end. Most of them involve the Night King or Azor Ahai or the Iron Throne… but one of the most popular fan theories of all involves less lofty topics and something much more relatable to fans: sibling rivalry. After the final episodes of Season 7, many viewers are convinced that the Cleganebowl will happen in Game Of Thrones Season 8?

Of course, most Thrones viewers will be familiar with the idea of the Cleganebowl, the long-anticipated clash between the two Clegane brothers: Joffrey's former bodyguard Sandor (aka the Hound) and Cersei's current bodyguard Gregor (aka the Mountain). The long-simmering animosity between the brothers has been a known quantity since the beginning of the series, ever since Littlefinger told Sansa back in Season 1 the horrific story of how Sandor got his scars. When a young Gregor found little Sandor playing with his toy, he picked his younger brother up and shoved his face into the fire. Ever since that traumatic moment, Sandor has been driven primarily by hatred for his older brother.

"Hate's as good a thing as any to keep a person going," he told Arya back in Season 4, when he heard the young Stark recounting her list of people she wants to kill — including the Mountain, who landed on her list for torturing her fellow prisoners to death at Harrenhal in Season 2. "We come across my brother, maybe we can both cross a name off our list," he said at the time.

The show has been teasing the idea of the Cleganebowl for years now. Many fans became convinced that it would happen in Season 6, after Cersei named the Mountain her champion in her upcoming trial by combat against the Faith. Given that the Hound was reintroduced that season (after his seeming death in the Season 4 finale) in the company of a septon, some theorized that Sandor would somehow become the champion of the Faith, and face off against Gregor to determine Cersei's guilt or innocence. Of course, that never came to fruition; Tommen outlawed the practice of trial by combat at the High Sparrow's urging, leading Cersei to avoid her trial by blowing up the Sept of Baelor and everyone inside it.

The Cleganebowl was next teased in Season 7, when the Hound and the Mountain crossed paths for the first time since Season 1, during the great armistice between Jon, Dany, and Cersei. Alas, the brothers did not come to blows at that time — although a promise of future retribution was made, as Sandor made it clear to Gregor that he still had a score to settle with his older sibling and tormentor. "That's not how it ends for you, brother," he said to the undead Mountain. "You know who's coming for you. You've always known."

So will this showdown finally come to fruition in Season 8? There are reasons to be optimistic and reasons to be pessimistic, depending on your point-of-view. For the pessimists among us, there's the fact that Game Of Thrones has always been a show that delights in subverting expectations: killing Ned in Season 1, cutting Robb's rebellion tragically short, crushing Oberyn's dreams of vengeance (and his skull), etc. Secondly, the Hound is currently at Winterfell, where the Night King and the army of his dead are heading. Surely some of our heroes will fall in that upcoming battle — and someone like the Hound, who fans have an emotional attachment to, but isn't a top tier main character like Jon or Dany, could be a prime candidate for death, forestalling any possible confrontation between him and the Mountain.

For the optimists among us, there's the simple fact of the sheer amount of times the show itself has promised viewers that the showdown would take place. You can't keep referencing the animosity between the Clegane brothers without paying it off eventually. You especially can't tease that specific event in the Season 7 finale and not follow it up in Season 8. That's just bad storytelling, not smart subversion.

Also, there's the fact that, even if the Hound does die in the Battle of Winterfell, that doesn't mean the Cleganebowl definitely can't happen. Whoever dies in battle against the Night King will likely be raised again as a wight, as viewers saw in the battle at Hardhome. The Hound doesn't necessarily have to be alive to fight the Mountain. In fact, an undead Sandor fighting a zombified Gregor would have a certain pleasing symmetry to it. Not even death can stop the Hound from getting his vengeance on the Mountain.

The Mountain portrayer Hafthór Björnsson recently teased on Instagram that his favorite Game Of Thrones scene "happens in Season 8...so I can't speak about it." What would Björnsson's favorite Thrones scene be, if not his character's long-awaited reckoning with the Hound? Whether Sandor is alive or dead, he's surely bound to face off against his brother in Season 8. All signs are pointing to Cleganebowl being on… GET HYPE!

More like this
Alicent's Green Dress In 'House Of The Dragon' May Be An Act Of War
By Kadin Burnett
Nicola Coughlan Shared A Lady Whistledown Excerpt From ‘Bridgerton’ Season 3
By Grace Wehniainen, Alyssa Lapid and Sam Ramsden
The 'Andor' Timeline, Explained
By Gretchen Smail
'The Rings Of Power' Episode 4 May Put A Face To Season 1’s New Villain
By Kadin Burnett
Get Even More From Bustle — Sign Up For The Newsletter