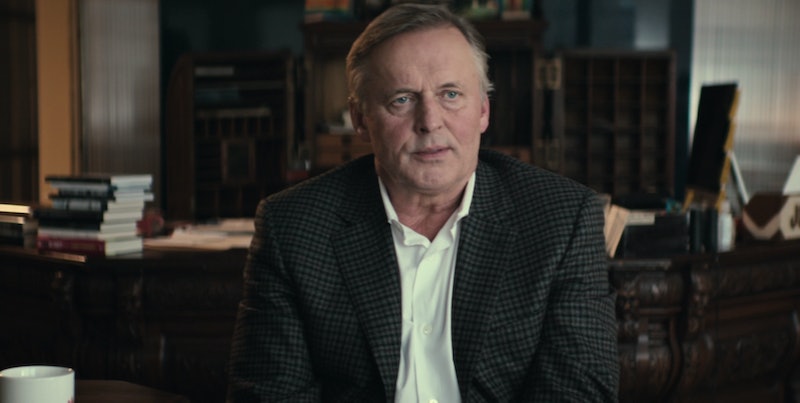 Netflix has made a name for itself in the true crime genre with showws like Making a Murderer and The Staircase, and now, it’s about to add another program to its arsenal. It’s unclear if Netflix’s The Innocent Man will return for a second season, but considering the subject matter it tackles, it could potentially go either way. The series is based on famed novelist John Grisham’s only nonfiction book, and focuses on two murders that took place in Oklahoma in the the 1980s. Even by the author's own admission, it's a pretty wild story.

"If I wrote The Innocent Man as a novel, folks probably wouldn't believe it," Grisham says in a trailer for the series. According to Vice, the book outlines the true story of two men — Ron Williamson and Dennis Fritz — who were convicted of beating, raping, and killing a 21-year-old waitress named Debra Sue Carter in Ada, Oklahoma, in 1982. After more than a decade in prison, they were exonerated by the Innocence Project, though it came nearly too late — Vice reports Williamson was just days away from being executed as part of his sentence when he was released in 1999.

Vice describes the show as a miniseries, which suggests there will only be one season. And as two of the men were freed in 1999, it's unclear how the show would continue on with their stories in a second season. Even Williamson and Fritz's settlements have been won and over with for years — per the the Innocence Project, they filed civil suits against the Pontotoc County district attorney and other parties, all of which were settled for an "undisclosed amount of money."

But they're not the only subjects of the Netflix adaptation. According to Rolling Stone, Tommy Ward and Karl Fontenot were convicted for another Oklahoma murder that happened in the same city two years later, and though they've maintained their innocence, they remain in prison for life.

If there are new developments in the cases of Ward and Fontenot, The Innocent Man could continue on into a second season, examining what happens after the Season 1 debut. Making a Murderer took a similar turn, following new lawyers and new evidence in its sophomore year.

It could also potentially continue by examining similar cases of people who've maintain their innocence after being imprisoned. As noted in the trailer, confession tapes played a huge role in putting these men away. In an age in which Brendan Dassey’s confession was alleged to be manipulative and coerced (the Manitowoc County sheriff's department has maintained it was obtained under standard protocol), and an entire Netflix series, The Confession Tapes, explores various alleged false confessions, The Innocent Man could keep going with that theme while rehashing different cases.

But those who tune in to The Innocent Man will just have to wait and see. The six-part series seems prepared to tell a one-season story, and while the possibility of a second season still looms, viewers shouldn’t let that distract from the tumultuous story ahead.