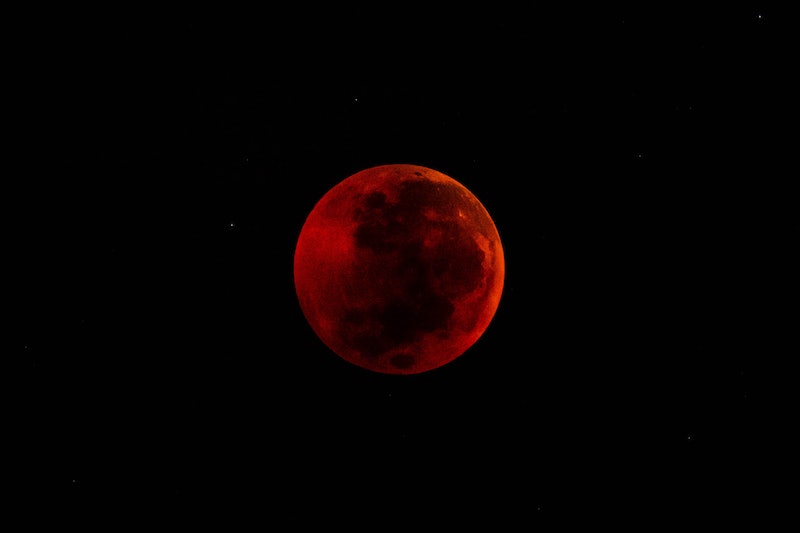 With a name as cryptic as "super blood moon," you're probably expecting to see a harrowing red orb in the sky between Jan. 20 to Jan. 21. But, we've been misled in the past — for instance, April's full moon is adorably titled the Pink Moon, and it never transforms into a bubblegum shade. So, it's worth asking: will the January 2019 super blood moon be red?

Good news: Actually, it will! A super blood moon isn't a regular full moon, it's a cool full moon.

Prepare to be amazed and maybe even a little creeped out by the hue of the full moon, which is taking place between Jan. 20 and Jan. 21. Don't worry, the end is not near, this is not a sign of impending doom, and it can all be scientifically explained. January's super blood moon is taking place during a total lunar eclipse, which is why it'll look a little redder than usual — and since it's a super moon, that'll also look larger. According to Space.com a lunar eclipse occurs, "when Earth's shadow blocks the sun's light, which otherwise reflects off the moon." In the event of a ~total~ lunar eclipse, Earth's shadow will cover the entire moon, turning it red. Talk about overshadowing.

If you're wondering why Earth's shadow looks so angry when cast upon the moon, it's due to the sun. Not because of fiery emotions. Time and Date writes, "some sunlight still reaches the lunar surface indirectly, via the Earth's atmosphere, bathing the moon in a reddish, yellow, or orange glow." What us Earthlings get from all of this is a spectacular lunar showcase, and maybe even a solid Instagram.

Before there was an internet to quickly receive an answer for the questionable hue of the moon, the sight of a super blood moon created a fearful stir. But because we now know that there's nothing to be scared of, and the title of "blood moon" is merely based on the color and nothing horror movie-related, you can enjoy the viewing. Unlike a total solar eclipse, the total lunar eclipse is safe to stare at. Popular Mechanics advised those interested with the best viewing tactics, writing, "You can even bust out the binoculars or telescope for a lunar eclipse, though you may want a telescope filter for the brighter eclipse areas." The good news is, your eyes won't burn.

If you're in a part of the world that won't have the best view of the eclipse, are working late, or just have a weird feeling about staring into a reddish moon, you can watch the eclipse through a live stream. Time and Date will be hosting a live stream beginning at 3:00 UTC. The total eclipse will begin at 11:41 p.m. EST and end at 12:43 a.m. EST.

Let that big pizza pie in the sky hit your eye on Jan. 20 to Jan. 21. The January super blood moon will look a lot more like pizza during the hour of its total lunar eclipse. And like all things that are somewhat related to pizza, prepare to be in awe.