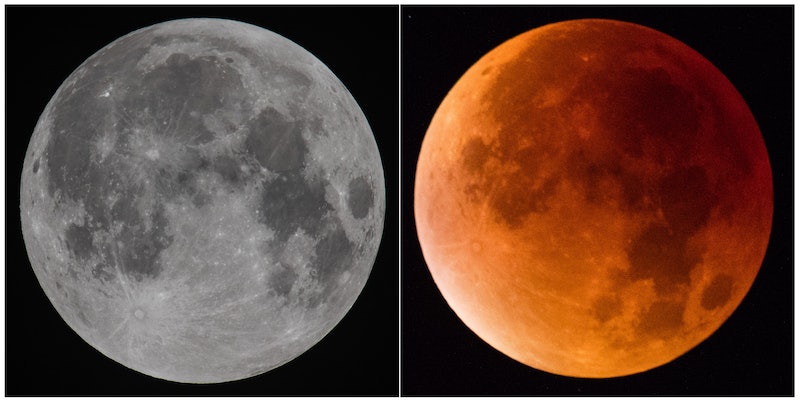 On Friday, July 27, a full moon will rise. While the moon will look pretty normal for those of us in North America, it's going to be pretty special for most of the world. Asia, Australia, and parts of Africa, Europe, and South America will see a blood moon in the sky. We're obviously all seeing the same moon, but it's pretty interesting to think about how different it will look to a big portion of the planet. If you're wondering how a blood moon differs from a regular full moon, you aren't the only one — we all know what a full moon is, but a blood moon sounds a lot more exciting.

In order to understand the differences between the two, you need to know exactly what each type of moon is and what it means. A full moon isn't actually full — it simply refers to the moment when the moon shows its full face to Earth. This happens once every month, although occasionally we'll experience a blue moon, which is when there are two full moons in one month. According to Space.com, "most of the time, the 'full moon' is never perfectly full. Only when the moon, Earth, and the sun are perfectly aligned is the moon 100 percent full, and that alignment produces a lunar eclipse."

Every month, the full moon will have a different name. The names were given to the full moons by ancient civilizations and tribes. Names were chosen before calendars were a thing, and ancient people picked them based on what was going on with the seasons during that time. July's full moon is called the Buck Moon, a name created by Algonquin tribes. The Buck Moon refers to the fact that, during July, a buck grows his antlers to their full size.

A blood moon, on the other hand, is what happens during a full lunar eclipse. A blood moon is still a full moon, it just looks different. Space.com says, "While it has no special astronomical significance, the view in the sky is striking as the usually whiteish moon becomes red or ruddy-brown." The moon isn't actually turning a bloody color, it just looks that way. A blood moon can only happen during a total lunar eclipse. During an eclipse, as the Earth blocks the sun, the darkest part of its shadow falls across the moon's surface. During a total eclipse, the Earth's shadow completely blocks out the moon. At the same time, a little bit of light will fall on the moon. Space.com says that "because the light waves are stretched out, they look red. When this red light strikes the moon's surface, it also appears red."

The biggest difference between a full moon and a blood moon is the appearance. A full moon will glow a white-ish color, while a blood moon will be a muted reddish color. Of course, one is also being seen through a total lunar eclipse, making it feel a little bit more special.

This week's blood moon is occurring during the longest total lunar eclipse of the 21st century, which makes it even more special. It will go on for one hour and 43 minutes, giving anyone in the area ample time to get outside and take a look. If you're one of the lucky ones who will be able to see it, we suggest you do so!