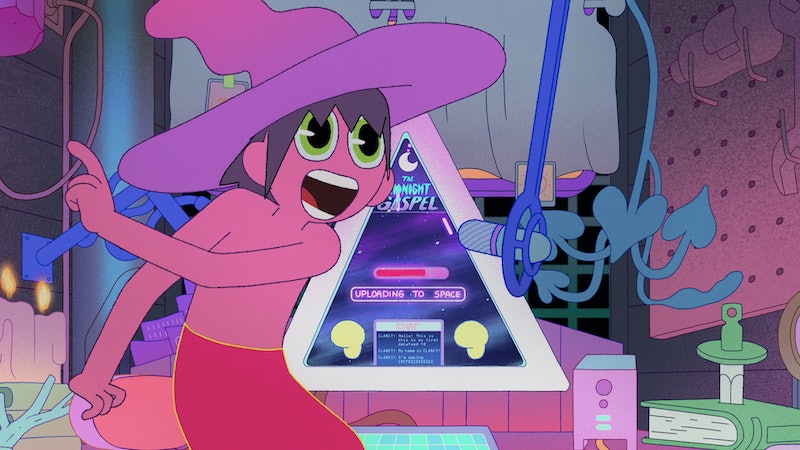 What happens when you mix Duncan Trussell's podcast about meditation and the nature of reality with Pendleton Ward's Adventure Time-esque animations? You get The Midnight Gospel, a deliriously psychedelic show about Clancy, a spacecaster who travels the universe interviewing extra-dimensional beings living on dying planets. Netflix has not announced if The Midnight Gospel will return for Season 2, but there's definitely no shortage of podcast episodes for creators Trussell and Ward to adapt.

The Midnight Gospel is based off of some of the earliest episodes of Trussell's podcast Duncan Trussell Family Hour, which began in 2013 and currently has nearly 380 episodes. The Midnight Gospel Season 1 features snippets of old conversations with comedians like Johnny Pemberton and Christina Pazsitzky, radio host Phil Hendrie, and actor Natasha Leggero, who hosted The Lavender Hour with Trussell before he started his own podcast. Most of these early podcast conversations were extremely freewheeling, with Trussell allowing the guests to take control of the discussion. The topics ranged widely from highbrow to lowbrow topics: they talk about everything from the prison industrial complex and the panopticon philosophy theory to loving dogs and using substances.

It's this kind of free flowing honesty that Trussell, and by extension The Midnight Gospel, thrives off of. "One of the things I love about the podcast is that you get this great information from world class guests, and some of those things stay with you permanently," Trussell explained to Psychedelic Times. "I’m telling you my truth — exactly how I feel, whatever it may be, logical or illogical — and if you hear that and don’t like me, then that’s okay."

Trussell said he encourages honesty among all his interviewees, as lying about what they're thinking and feeling is a disservice to both of them, since they'd be "cobbling together some kind of mask" based on what they think the other person wants to see.

We'll have to wait and see if Trussell's radical honesty mixed with Ward's strange and sometimes terrifying animations drum up enough viewership for Netflix to renew The Midnight Gospel. "It shouldn't work, but it does," Jake Kleinman writes in his review of The Midnight Gospel for Inverse. "Even if you're more interested in Ward's hallucinogenic art style, you'll quickly be sucked in by the equally bizarre conversations."

If the show does get a renewal, though, it's likely that a new season will take at least a year to produce, and may be even longer due to the ongoing pandemic. Luckily, there's plenty of Duncan Trussell Family Hour to check out in the meantime. For those unsure if the full podcast episodes are quite your speed, you can always start with Trussell's recent conversation with Supergirl actor Mehcad Brooks. They talk the upcoming Mortal Kombat film and the afterlife, and it's a pretty accessible episode to start with. Then, when you want something that's also a visual feast, The Midnight Gospel will be waiting on Netflix.