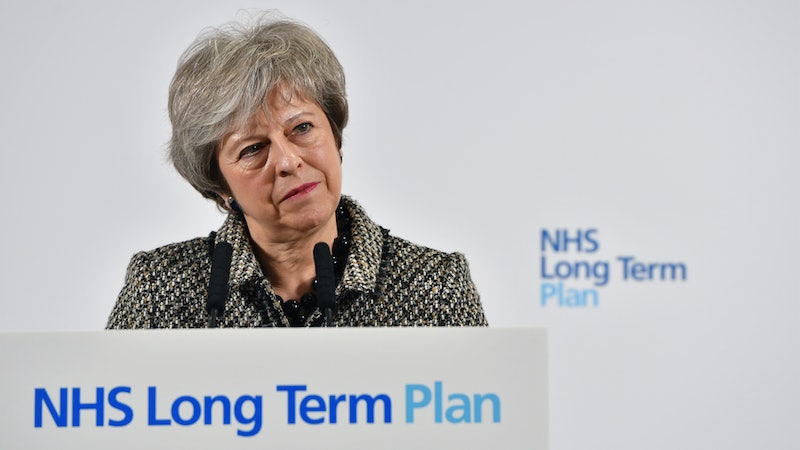 If there's one thing that continues to dominate Brexit conversations, it's the NHS. After all, it's an institution that UK citizens holds incredibly dear. But, thanks to a few choice words from Donald Trump, many are becoming increasingly worried that the NHS could be privatised after Brexit.

On Tuesday, the U.S. President spoke about a transatlantic trade deal that is expected to be implemented if the UK leaves the EU. As The Sun reports, he said: "When you're dealing in trade, everything is on the table, so NHS or anything else, a lot more than that, but everything will be on the table, absolutely." (Trump later backtracked, telling Piers Morgan: "I don't see it on the table.")

But his earlier comments sparked fear in a lot of people, including politicians who quickly issued their response to Trump's initial statement. Current Health Secretary Matt Hancock tweeted: "Dear Mr President. The NHS isn’t on the table in trade talks — and never will be. Not on my watch."

Conservative leadership contender Dominic Raab echoed Hancock's words, writing: "I want to see the UK get fair deals on trade with the US and many other countries when we leave the EU. But the NHS is not for sale to any country and never would be if I was Prime Minister." Fellow leadership contender Rory Stewart also said he "would not be 'offering up' the NHS in any trade deal."

But are their promises meaningless? The NHS may not be "for sale" as MPs put it, but, for years, it has been privatised to some degree. As the Guardian reported in Jan. 2019, the 2012 Health and Social Care Act dictates that NHS clinical commissioning groups in England tender out any contract worth £615,278 or more.

"It’s nothing new and, in many ways, the fact that the NHS has always been a public/private partnership is the best kept secret there is," David Hare, chief executive of the NHS Partners Network, told the Financial Times in August 2018.

In fact, the paper reported that the NHS in England spent over 10 percent of its total 2017-18 outgoings on "care provided by non-NHS organisations." The monetary figure came to £13.1 billion. More than two thirds of this amount went to companies in the private sector. (The rest was a combination of local authority and voluntary care among other things.)

NHS privatisation can lead to shorter waiting times and more options for patients, Hare noted to the Financial Times, but it hasn't escaped controversy. In 2016, Richard Branson-owned Virgin Care sued the NHS after it awarded an £82 million contract to another organisation. As the Independent reports, an undisclosed settlement was made in November 2017.

At the time, Shadow Health Secretary Jonathan Ashworth said: “It’s scandalous that NHS money is being wasted on fighting off legal bids from private companies. Ministers need to make clear how much public money has been used in this case — at the least it seems to be hundreds of thousands of pounds. That is money that could be being used for NHS patients who are waiting longer than ever for routine services.”

Handing over health services to profit-driven companies has also been criticised by the British Medical Association (BMA). In response to potential post-Brexit deals, BMA council chairman Dr. Chaand Nagpaul told the Yorkshire Post in Sept. 2018: “Our public health service cannot be dismantled and auctioned off to the highest bidder bit by bit to plug holes in the country’s finances caused by a poorly judged political decision.

"We must not allow any future deals to dictate Britain’s ability to improve the health and wellbeing of its citizens, but many agreements include clauses that could do just that. Such clauses mean companies can sue governments for introducing policies or measures that seek to improve models of care and public health, but in doing so hit investors’ profits."

The U.S. issue appears to be the biggest concern right now, especially because the UK government seems to be relying on a trade deal with America in an attempt to create a smoother post-Brexit transition. But, as The Sun explains, healthcare companies in the U.S. are hoping to be able to bid on lucrative NHS contracts. This could mean that access to the NHS becomes a non-negotiable point if we are going to secure a successful trade deal with the U.S. One journalist even argued in the Independent that the UK doesn't have much to offer if the NHS is off limits.

So, as with all things Brexit-related, it looks like the question of further NHS privatisation is set to remain unanswered for a little longer. But, if the UK really does need the U.S.' support, the fate of the NHS may have already been determined.