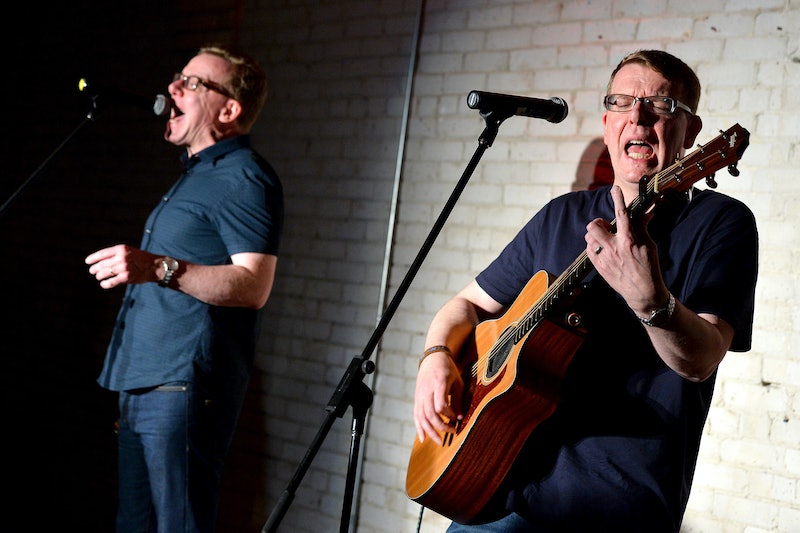 If you would walk 500 miles to see a show from The Proclaimers, and maybe even walk 500 more, then, first of all, you are an extremely dedicated fan. I mean, 1,000 miles is a long way. Not only would it take a good few weeks, and ruin all your shoes, it would also be a bit unnecessary. You don't have to make like The Proclaimers or Vanessa Carlton to prove your love to these heritage Scotsmen, because they've got some gigs coming up very soon in a town near you. So if you're wondering when The Proclaimers will tour the UK in 2019, listen up, because I've got all the info you need.

As the Daily Record reported on November 20, 2018, Charlie and Craig Reed, aka The Proclaimers, announced four "special" gigs across their home country of Scotland, including two huge dates at Edinburgh Castle and Glasgow's Hydro. According to the paper, these extra shows were added to their already jam-packed 14-month Angry Cyclist tour — which they're playing in support of their 2018 album of the same name — because of the initial overwhelming ticket sales. 80,000 to be precise. And that figure was reported by the paper back in November, mind. It's my guess that by now, a good 100,000 of you might have tried to walk 500 miles, and then some, to get your tickets.

Aside from these special Scottish shows, you can catch the Reed boys elsewhere in the UK later on this year. Along with Glastonbury, they're playing a couple of more lowkey festivals at the beginning of August, according to the website. The first is the folky Wickham Festival in Hamshire, which they'll be headlining on its opening night. Tickets are still available, and they start from £160, if you fancy snapping one up.

They'll then be pitching up at South Yorkshire's Underneath The Stars the following day, on Friday, August 2nd. They'll be headlining the festival alongside folk legends Billy Bragg and Kate Rusby, and limited tickets are also available for this one, but only on the Sunday, which unfortunately means that if you haven't already snapped up a weekender, then you'll be missing out on the boys this time around.

But don't fret. The Proclaimers have a good sized string of shows across England and Wales, beginning with a stop at Warrington's Parr Hall, and culminating in Swansea's Brangwyn Hall on September 1, 2019. You'll want to get in very quickly for these though, because as of writing, the majority of tickets have sold out, and where there are tickets available, the majority only have less than twenty tickets left, according to Viagogo's site.

So, while you might not have to walk 500 miles to snap up a ticket, you will have to get a move on, as these tickets are selling out fast. But, either way, no one really needs to walk 500 miles to prove their love these days. I mean, Uber exists, guys. Make mine a pool.