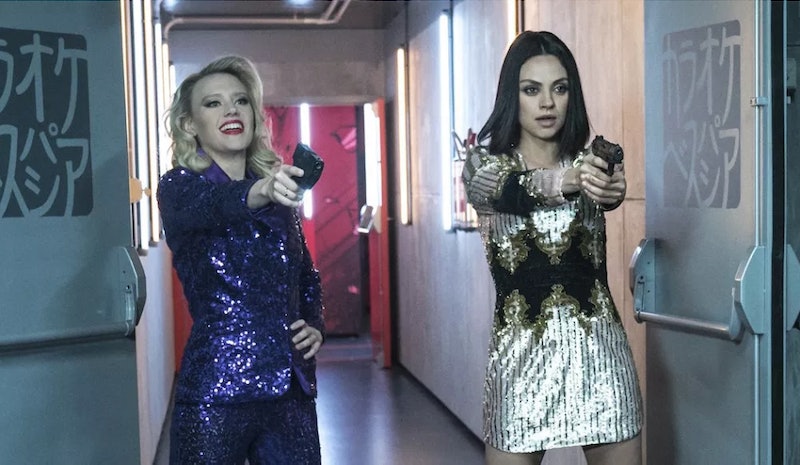 The Spy Who Dumped Me teams up Mila Kunis and Kate McKinnon as besties who become embroiled in international intrigue. The two slowly turn from Ugly Americans into semi-competent secret agents as they bungle their way through Europe trying to complete the mission they never accepted. But will The Spy Who Dumped Me have a sequel? For a film based on franchises like James Bond, Mission Impossible, and the Bourne series, it's practically baked into the premise.

So far there's no official word on whether a sequel will happen, but everyone involved is ready to see the girls take on another assignment. In a Bustle interview, director Susanna Fogel revealed another film isn't out of the question. “We’re all talking about [a sequel], we had the best experience, and now we’re all friends and it’s just joy,” she said of working with Kunis and McKinnon. The actors hadn't met before making the film, but speaking to ScreenRant, they both said their pairing felt great. "It was so easy and natural. It was kind of creepy. It was like instant. Something about it just worked and it was like, ‘Well, great, we don’t have to work on this part,'" said McKinnon, with Kunis echoing the sentiment.

In The Spy Who Dumped Me, Kunis is Audrey, an aimless young woman whose boyfriend Drew (Justin Theroux) seems to have ghosted her right around her 30th birthday. Her friend Morgan (McKinnon) won't stand for that, but after she leads Audrey into triumphantly torching Drew's stuff, he reappears. Turns out he was a CIA spy, and the bad guys gunning for him are now after the girls. What follows is a fish-out-of-water buddy comedy of errors, as the two try to deliver information to a European contact without getting killed.

Talking to Den Of Geek, Fogel said that her decision to meld a story of female friendship into the normally high-testosterone world of spy movies was deliberate. "It's been increasingly hard to make small stories about female friendship, and, definitely, those stories don't have any shot of getting a theatrical release," she said. "So if you're a filmmaker who grew up wanting to make a movie for people to have that female experience of sitting in the theater together, it's hard to do unless you can compete with the bigger spectacles that are being offered to them."

And so, the friends are dropped into the brutal, violent world normally the domain of loner males gunning and improvising their way through increasingly deadly and ridiculous situations. As they manage to make their way through similar scenarios as a pair, including surviving an encounter with a sadistic, stone-faced gymnast, the two women gain confidence in each other and themselves. In a world where Audrey's boyfriend specifically says to trust no one, Audrey can rely on Morgan to accept her as she is, and vice versa.

Spoilers ahead. And so it's fitting that the film ends with a final shot of both women, now fully confident spies, celebrating their friendship and ready to take on their next assignment. Clearly, the ladies are set up for more adventures to come.