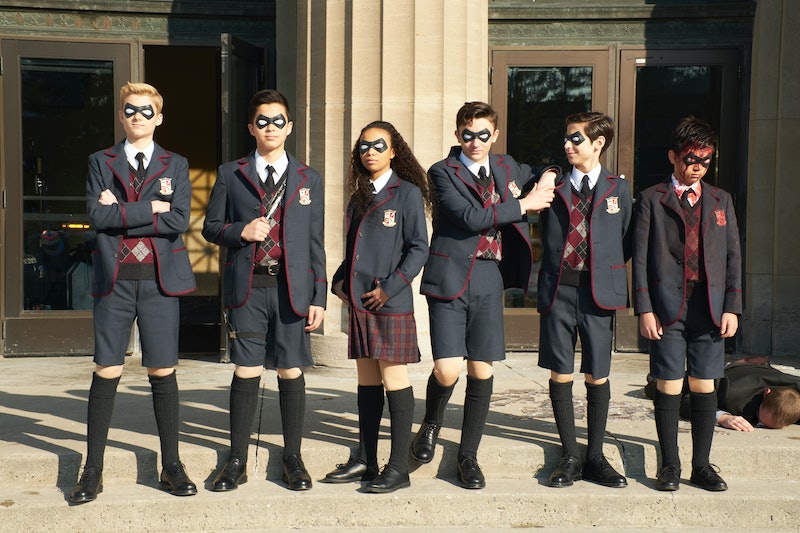 If you've ever wanted to delve inside the mind of former My Chemical Romance frontman Gerard Way, Netflix's The Umbrella Academy is your chance. The series is based on Way's comic series of the same name, which follows a family of super-powered siblings who are suddenly born to "random, unconnected women who showed no signs of pregnancy the day before," according to the official synopsis. And while it's not yet clear if The Umbrella Academy return for Season 2, Way is already plotting a long future.

Update: The Umbrella Academy has been renewed for Season 2, Netflix confirmed in a press release.

Earlier: According to Collider, he's still writing the graphic novels, but has told showrunner Steve Blackman how the story will proceed. "What I did for Steve Blackman and the writers in that first writers room was to create an 18 page document that laid everything out. Even of the graphic novels that haven't come out yet," Way told the outlet. "Which should equal eight when we're all done. So I gave them the blueprint for what happens, because you do want to seed certain things in there for future series and the hope is that it's a success so that you do a lot more of these."

Way is throwing himself into The Umbrella Academy in more ways than one — he's also recorded music for the series, some of which can be heard in the trailer for the show, found above. That'll be a treat for anyone dying for a little taste of what the world lost when My Chemical Romance hung up their Black Parade gear for good. Way — who continues to record solo material — told The Guardian that after being in a band for years, he's happy to be working more independently.

"I like being super creative all the time, and, unfortunately, when you're in a really big band you're actually doing a lot of boring stuff, like being on the road and missing your family. A lot of it is business," he explained. "Now I get to stay home with them, and make my comics and sit in my office, and I don’t have to leave the house, or those people."

He also told the outlet that comics are what he set out to do in the first place — he started writing them at 16, studied fine art at New York's School of Visual Arts, and even interned at Cartoon Network before he ever began to write songs. "It was a release for me – kind of like art therapy," he said. “And then it took off and became this uncontrollable thing."

It's unclear how audiences will receive The Umbrella Academy, but Way has spent decades cultivating a musical fanbase that will no doubt take notice of any other projects he's involved in. He seems to be exactly where he wants to be, and he's passionate about the story The Umbrella Academy offers. The future of the show is up in the air for now, but it certainly can't hurt to have such a passionate creator at the helm of its story — and especially one with a plan.