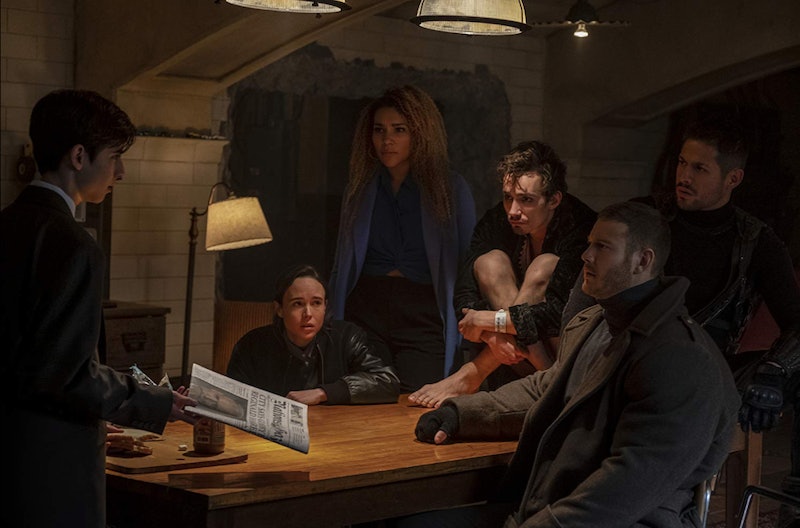 Good news, Gerard Way fans! Netflix has officially released the first trailer for The Umbrella Academy, and it will make you wish you could marathon the upcoming series right now. Based on Way's graphic novels, the show will premiere on Feb. 15. That might feel like a long time to wait, but the first trailer introduces the six main characters with so much style that it might just be enough to hold you over until the premiere.

As the trailer shows, the series revolves around a mysterious phenomenon in 1989 that caused 43 women to give birth with no signs of pregnancy the day before. Out of those children, seven were adopted by billionaire Sir Reginald Hargreeves, who creates The Umbrella Academy to train the kids to become superheroes in hopes that they'll save the world. But that doesn't pan out, and the children go their separate ways. It's not until their adoptive father's death that they're forced to reunite.

Even if you're not a fan of Way's My Chemical Romance or you've never read the books, The Umbrella Academy is one of the most anticipated TV shows for 2019 for a great reason: its all-star cast. Netflix gathered an incredible, eclectic group of actors for the show that you might not have expected to see together.

The six surviving children (you'll have to watch the show to know what happened to the seventh one) are made up of a mix of beloved actors and newcomers. Ellen Page plays The White Violin; Game of Thrones and Merlin’s Tom Hopper plays Spaceboy; Misfits' Robert Sheehan plays The Séance; Nicky, Ricky, Dicky & Dawn's Aidan Gallagher plays The Boy, and newcomers Emmy Raver-Lampman and David Castañeda play The Rumor and The Kraken, respectively.

The rest of the ensemble is filled with recognizable names, too, including Mary J. Blige as Cha-Cha, an assassin who is set out to kill Number Five with her partner, Hazel, played by Stitchers and Mindhunter's Cameron Britton. And if you're a Grey’s Anatomy fan, you’ll be happy to know that Kate Walsh will make recurring appearances as The Handler.

Entertainment Weekly reported that details about the show were first revealed at New York City Comic Con in October, where the cast gathered for a "Netflix and Chills" panel that introduced their characters. Moderator Josh Horowitz mentioned that in the first episode, there'd be a dance montage, as seen in the trailer. The actors didn't reveal the context of the scene, but now fans get to see a glimpse of it before the show premieres.

Luckily, the cast did confirm that music would be a large part of the show, so you can expect a great soundtrack to accompany it. But unfortunately, Way doesn't seem to have any involvement in the music for the show—at least, for now.

Now that Netflix is cancelling many of its superhero-focused content, The Umbrella Academy will surely fill the void in that department. And if the show's as incredible as it looks, there's plenty of material for Netflix to explore.