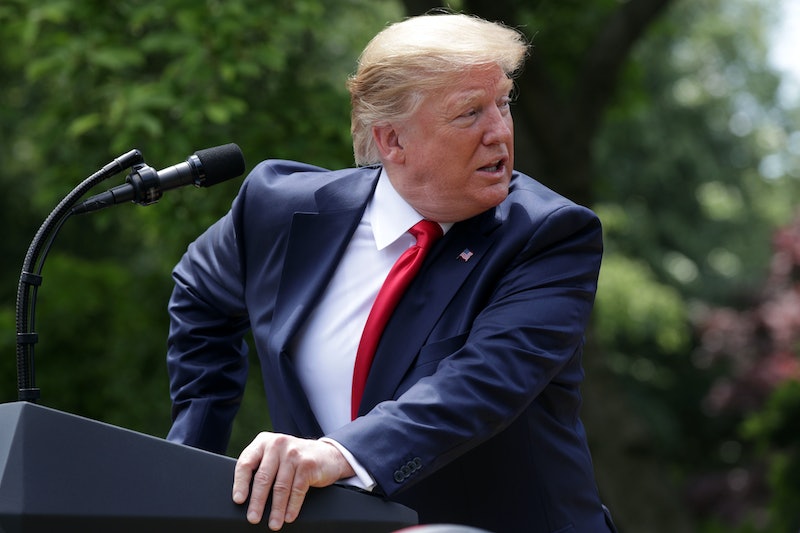 On Wednesday, Trump invoked executive privilege to block the release of Special Counsel Robert Mueller's unredacted report on Russian interference in the 2016 election and possible obstruction of justice. As such, it's now unclear when or if the unredacted Mueller report will ever be released.

"This is to advise you that the President has asserted executive privilege over the entirety of the subpoenaed materials," Assistant Attorney General Stephen E. Boyd wrote in a letter to House Judiciary Committee Chair Jerry Nadler, whose committee had subpoenaed the unredacted report. "As I indicated in my letter to you last night, this protective assertion of executive privilege ensures the President's ability to make a final decision whether to assert privilege following a full review of these materials."

Mueller's report was released in April; however, about one-third of it was redacted, according to a BuzzFeed News analysis.

Boyd's letter comes a week after Attorney General William Barr refused to appear for a testimony in front of the House Judiciary committee, which prompted the committee to schedule a vote on whether to hold Barr in contempt of Congress. The Justice Department had requested that the House Committee delay the contempt vote, but it didn't, and Boyd said this made it "necessary" for Trump to invoke executive privilege over the unredacted report.

Exactly what happens next is uncertain. House Democrats could sue the Justice Department to get the full report, and according to Stephen Truitt, who worked in the Justice Department during the Johnson administration, they could be successful. In an interview with NBC News, Truitt said that Trump may have already waived the right to exert executive privilege when he agreed to be interviewed by Mueller during the investigation.

"It is extraordinary that [Trump's] lawyers did not make explicit to Mueller in a letter that a waiver [of executive privilege] was not intended if they had the slightest doubt about it," Truitt told NBC News. “I think a court will find the privilege is inapplicable given the waiver.”

In a 27-page report released to the press, Democrats on the Judiciary Committee explained why they are seeking the unredacted Mueller report, and in doing so, mentioned the prospect of impeachment.

"[T]he Committee needs to review the unredacted report, the underlying evidence, and associated documents so that it can ascertain the facts and consider our next steps," Democrats said. "That includes whether to approve articles of impeachment with respect to the President or any other Administration official, as well as the consideration of other steps such as censure or issuing criminal, civil or administrative referrals."

Frank Bowman, a law professor at the University of Missouri, told Reuters that the reference to possible impeachment could improve Democrats' chances of winning a lawsuit over executive privilege, should they file such a lawsuit. This is because, when impeachment is involved, "virtually no part of a president’s duties or behavior is exempt from scrutiny," Bowman said.

After being informed that Trump was claiming executive privilege, Nadler issued a statement pledging to "confront the behavior" of the administration, according to CNN.

"The Department's decision reflects President Trump's blanket defiance of Congress's constitutionally mandated duties," Nadler said. "In the coming days, I expect that Congress will have no choice but to confront the behavior of this lawless Administration. The Committee will also take a hard look at the officials who are enabling this cover up."