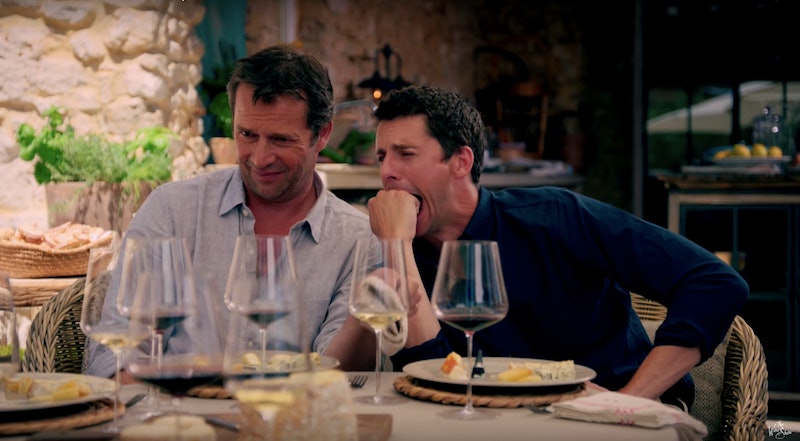 The Wine Show is here for you after and between your Great British Bakeoff holiday marathon, with more information than you could ever dream of about wine and hilarious adventures. If you haven't watched the whole thing on Hulu, Season 2 is finishing up its run in the U.S. on Ovation. But will The Wine Show return for Season 3? Wine not!

There's been no official word about a renewal or cancellation — however, the show has a flexible enough setup that there totally can and totally should be a Season 3 ASAP. Season 2 aired in the UK in 2017, so it's been a minute. In the second season, Matthew Goode was joined by James Purefoy, with former Wine Show celebrity taster Matthew Rhys appearing instead just for gadget segments (which, as fans of Season 1 know, is his real love, anyway). Season 3 could bring Rhys back with Goode now that he's done shooting The Americans, or mix it up yet again.

Let's do some digging. The series no longer appears on the website of ITV, the network that broadcasts the series in the United Kingdom. That's not a great sign, unless they're just very tidy and only showcase current shows online. It is, however, still on the site for its American home Ovation. There's also the official Wine Show website.

The only real hints are some tweets from the show's host/presenter/wine expert, Joe Fattorini — and they're just tweets, with an occasional off-topic reply from the show's official Twitter. Take from it what you will, but you shouldn't take much more than a general enthusiasm to film more episodes.

Perhaps the delay in an announcement has to do with scheduling. Goode has had a busy 2018, with multiple television and film projects including Ordeal by Innocence, A Discovery of Witches, and Official Secrets in the works. Rhys, who was filming The Post in between his Season 2 appearances, has two wildly different films coming up — one about the 9/11 attacks and one about Mr. Rogers. Purefoy also has multiple upcoming projects. So perhaps everyone has been too busy.

Season 1 found a home base in Italy, and Season 2 set up camp in Georgia (the country), so if the show did return for Season 3, there are still plenty of other countries with wine-rich history to explore. Fattorini and the other main presenter Amelia Singer additionally travel all over the world for segments that tell stories about the history and current state of wine. They're fascinating, and that well's not running dry any time soon. There are definitely stories left to tell on The Wine Show.

“All the stories in a way are universal," Fattorini told Variety, "'What would happen if prisoners were given jobs in vineyards? How did spies get around France in WWII?'”

Don't give up hope — it's always possible that The Wine Show Season 3 will go into production in the future. Until then, you can catch up with the series online, have a tasting of your own, book a Wine Show cruise... there are so many ways to keep the wine content flowing.