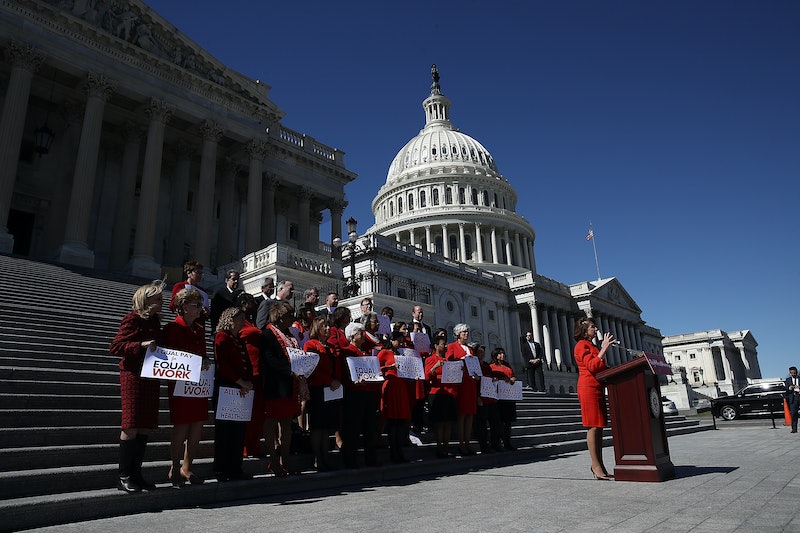 The "A Day Without A Woman" Strike, which coincided with International Women's Day on Wednesday, was aimed at demonstrating the huge contribution women make on aspects of our socio-economic system, all while being more vulnerable and discriminated against in the workplace. It reached 50 countries and over 400 cities around the world, with women taking the day off of work, avoiding spending (except at women-owned or minority-owned businesses), and wearing red to show their support for those striking. But, on a fundamental level, will it make a difference?

To answer that question, we need to put it into recent perspective. Since the election, there's been a huge galvanization of women in the U.S. and around the globe. We saw it with the Women's March. "We're all rallying together. We're unifying," Breanne Butler, one of the Women's March global coordinators, who has helped to organize more than 300 sister marches across the United States and overseas, told Bustle. "We're uplifting the voices that have been marginalized for a long time, particularly in this past year, and we're coming together in one voice and making a strong statement to the upcoming administration: 'Hey, we're here, we're watching you. Welcome to the White House. We are not going to be silenced any longer.'"

But can we keep that momentum going? Can there be more resistance, more fight, than just one huge march? Well, yesterday's protest was a huge test of that, so let's take a look at how it fared:

While there are some critics who say unless a strike stops something by bringing it to a grinding halt, it's not doing its job. So when train drivers go on strike for example, the trains stop. But yesterday didn't bring the economy crashing down, it didn't stop businesses from running, so does that mean it wasn't a success? Well, that's not what it was about.

“The object for us isn’t that we hope to shut the whole economy down,” Linda Sarsour, a co-chairwoman of the event, told The New York Times. “We see this as an opportunity to introduce women to different tactics of activism. Our goal is not to have the same numbers as the march.”

A heartening part of this whole movement, from the Women's March in January to Wednesday's strike, is seeing how many people are becoming really politically engaged for the first time. I have friends— and everyone I know has friends — who have been striking, marching, or just really looking at the issues for the first time. And the power of that shouldn't be underestimated. We can see yesterday's protest as capitalizing on and encouraging that momentum. Janna Pea, a spokeswoman for the Women’s March, said the day before the March that they had 30,000 women registered who wanted to take part — mostly in New York and California, which is really impressive for a general strike.

And Is Making Efforts To Retain Them

But once people get involved, the real work is maintaining that. It's not the one-off big protest or march, (though those are so vital and admirable) there's the day-to-day engagement. And that's harder to maintain, because there's less push behind it. It's about people getting involved off their own backs and without the same social media backing. It seems like the organizers recognize that and want to make sure that the momentum continues.

But What Does The Future Hold?

"It is imperative that we stay consistently engaged with what's going on nationally and locally in order to keep up this momentum."

With the Global Gag Rule, the potential Affordable Care Act repeal and defunding of Planned Parenthood, and more — women right's have been in jeopardy since the day Trump was elected. Trying to wrap your head around the fact that someone who brags about grabbing women by the genitals is our president, that your friends and neighbors voted for that man to be our president, is difficult enough. But keeping up with the onslaught of legislations and policy aimed at eroding our rights is going to be way harder. We don't need to look any further than the Republican Affordable Care Act alternative and its failure to protect women's access to abortion and affordable contraception to see that the big fights are still to come.

"In the words of Tamika Mallory, co-chair of the Women's March, 'protest is not enough'," campaign director at MoveOn, Jamiah Adams, tells Bustle. "While #ADayWithoutAWoman was an undeniable success, especially in cities like New York and DC, public demonstrations alone aren’t going accomplish our overarching goals. It is imperative that we stay consistently engaged with what's going on nationally and locally in order to keep up this momentum."

So will the Women's Strike make an impact? Well, it may not have shut down the economy (which again, wasn't the goal) or stopped companies from working, but if it can keep a group of strong, powerful, and persistent women focused on the fights ahead? That's huge.

Since the Women's March, there women have been leading the fight for Planned Parenthood by speaking to their representatives, they've been staging meetings and call-ins. They've been connecting, they've been brainstorming, and they've been working. If we can keep that up — if we can build on it— then the impact of the strike is limitless.