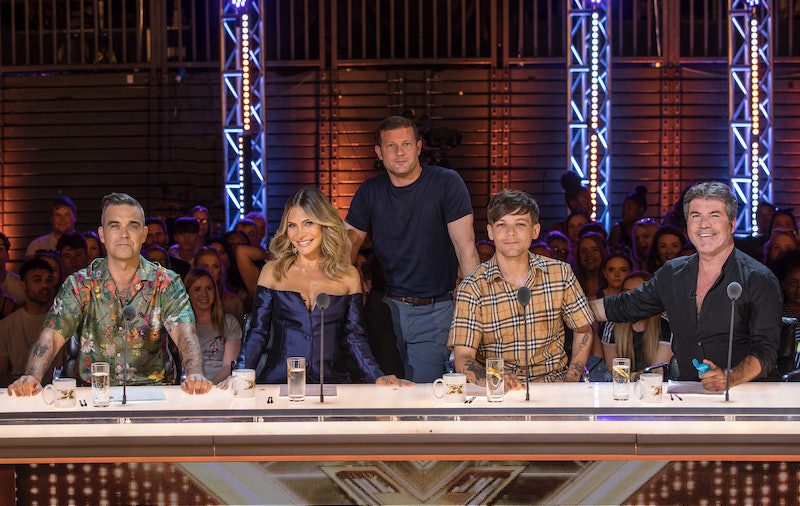 The X Factor has been one of the most talked about events on the TV calendar ever since its conception back in 2004. However, in recent years the hype around the show has somewhat dwindled, as have the once massive television ratings. So will The X Factor return in 2019?

Currently, nothing has been confirmed by producers or the broadcaster. Bustle have contacted ITV for comment, and will update with any information once it becomes available. However, according to The Sun, the series is most definitely coming back in 2019. When discussing which judges he'd like to see return next year, Simon Cowell said "I’ve spoken to Robbie who with Ayda definitely wants to come back, I hope Louis does too. The truth is they have all had a great time." Although this isn't an official confirmation, Cowell's comments certainly imply that The X Factor will be back in 2019.

The head judge also addressed comments about the 2018 series being the least watched in the show's history, Digital Spy reports. He said: "There’s nothing much you can do about it. If I was a broadcaster I would think we had an easy year." Despite the lower viewing figures, the newly crowned X Factor 2018 champion, Dalton Harris, is on course for chart success. According to the Express, Harris' brand new single "The Power of Love," which features previous X Factor winner James Arthur, is predicted to land in the top five this week.

The sales tracking week of singles here in the UK runs between Friday and Thursday, but because Dalton's X Factor victory track wasn't released until late Sunday evening, he was at an immediate disadvantage of reaching the all important number one spot. However, in spite of this setback, the 24-year-old had already reached the top five in the mid-week charts.

Since being voted winner last weekend, Harris has opened up about his time on the ITV competition show. Whilst speaking about his X Factor success with TV host Lorraine Kelly, Harris said "No it's not sunk in. Still not able to feel anything. It's just crazy. It'll sink in," and went onto discuss his relationship with mentor and judge, Louis Tomlinson. He said: "I think Louis Tomlinson is the one who over the course of my journey has said be yourself. Normally I'm naturally laid back. I questioned, 'why am I even here? I'm quiet. Am I not TV enough?' He was like 'no you're you'," reports the Express.

In the midst of all the celebration, fans of the X Factor winner were shocked to discover that Harris was forced to return to his home country of Jamaica shortly after the 2018 series wrapped up. As reported by the Daily Star, the singer's visa only allowed him to reside in the UK for the duration of the series. When addressing the issue, Harris said "I need to get a new visa. I will have to leave the UK for a bit as you're not allowed to just stay forever."

So it sounds like Harris and his incredible talent will be back in Blighty very soon. And I cannot wait to see him on the X Factor tour next year.