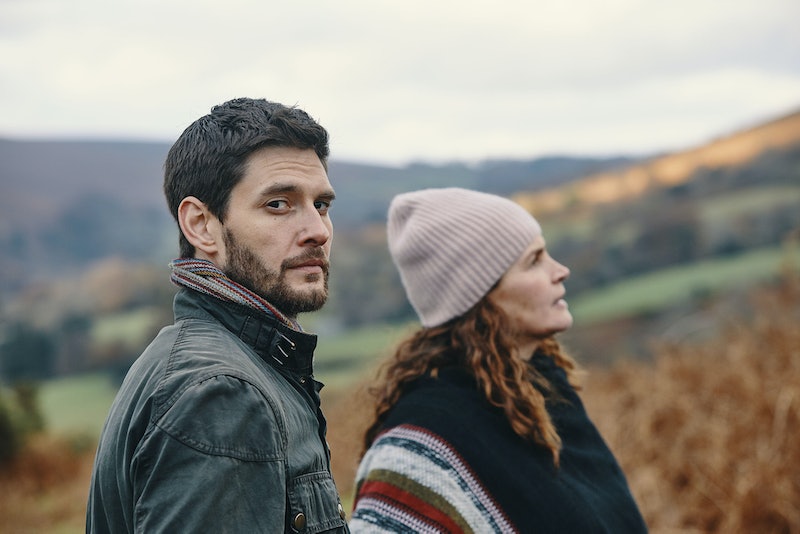 BBC has a knack for creating gripping drama from all sorts of subjects, from sassy assassins to perils of protecting the Home Secretary. Gold Digger is no different, which has been gripping viewers for the past few weeks. But will there be a Gold Digger season 2, or are the six episodes enough to tell Benjamin (played by Ben Barnes) and Julia (Julia Day)'s story?

While the series has been well-received by fans, the BBC hasn't given much to go on as to whether it'll return. Bustle has reached out to a rep to see if there's a chance of a second series, but have yet to hear back.

Back when Gold Digger first started airing, HITC.com noted that there's "been little to suggest that the BBC are planning a second series," citing that the last few episodes conclude with minimal loose ends. So I guess that means season two is unlikely. But you never know — watch this space.

If you've been watching the show weekly, you may not be aware that after the first episode aired the whole series was made available on BBC iPlayer.

Despite the notion of a second series being up in the air, it would be interesting to see where it goes if it were to continue. If Julia and Benjamin's relationship is wrapped up by the end of the first, the show could easily continue with a new couple to explore. "This story is beautifully revealing of how we pigeonhole people, how we write them off and how we close certain aspects of their life because we see them as fitting a specific role," Day told the BBC.

Told through a different couple while hitting the same beats as the first series, Marnie Dickens could further explore the role reversal of an older woman dating a younger man. "Despite the fact that we're very used to seeing older men with much younger women, to see the reverse throws into sharp relief our societal expectations of women," Day explained. "One would think it should be inconceivable, but at the same time something does feel off..."

More like this
Every Season Of 'Love Island' Ranked Best To Worst
By Alice Broster, Frances Stewart and Sophie McEvoy
'The Last Of Us' Has Officially Been Renewed For Season 2
By Darshita Goyal
'Abbott Elementary' Fans Probably Missed This 'Parent Trap' Easter Egg
By Sam Ramsden
9 Time Catherine Cawood Was An Absolute Badass In Happy Valley
By Sophie McEvoy
Get The Very Best Of Bustle/UK
Sign up for Bustle UK's twice-weekly newsletter, featuring the latest must-watch TV, moving personal stories, and expert advice on the hottest viral buys.