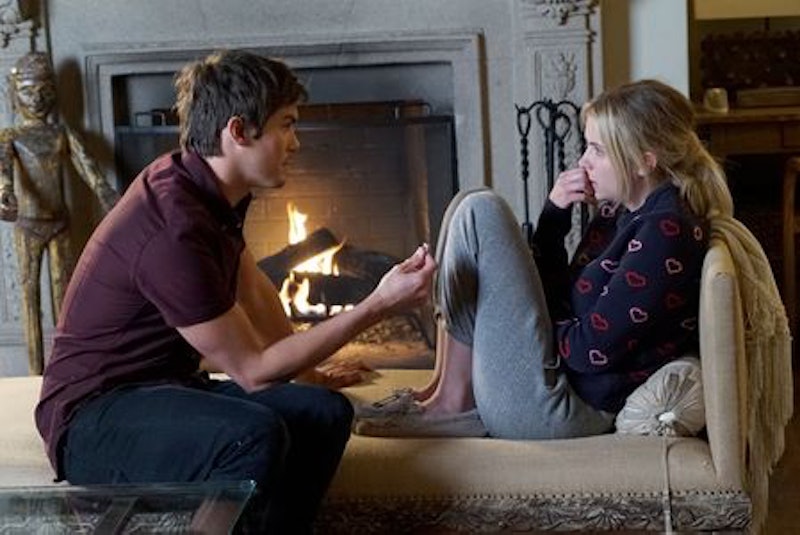 Pretty Little Liars has had plenty of couples to ‘ship over the years. Some are good (Caleb and Hanna), some are bad (Spencer and Caleb), but they all have done their part to shape the Liars’ lives and incite pandemonium on Twitter. Now that Pretty Little Liars is nearly done, we have to see at least one of these relationships come to the ultimate stage of relationships, yeah? I’m talking marriage. Down-the-aisle, his-and-hers, throw-the-bouquet, drive-off-with-tin-cans-behind-you marriage. Will there be a Haleb wedding on Pretty Little Liars?

I know what you’re probably thinking — Aria and Ezra are already engaged, so they will probably be the ones to get married! Well, firstly, gross, because I’m still not over the fact that they started dating when she was a student in his high school English class, but secondly, I’m not so sure that these two will even be together at the end of the first episode, let alone the season. Last we saw Aria and Ezra, they were technically betrothed, but Ezra had gone off to Colombia to see if his ex-girlfriend, Nicole, was really captured by rebels and dead or just had been playing her own version of Naked And Afraid for the past few years. Spoiler alert — she’s alive! And Ezra was seen on television giving her a big old smooch. Cue Aria going back into her stash of big earrings to mourn.

Caleb and Hanna have certainly had their issues over the years (and he even dated Spencer for a minute, which was a big girl code violation to the Liars), but ultimately, these two keep coming back to each other. I mean, did you think that she was really going to marry Jordan? He had the character development of a piece of wood, even if he did give her a nice ring (that Hanna probably picked out herself). From the moment Hanna and Caleb became coupled, they were meant to be. Now, they’re older and wiser and have chosen to be together, and so they should get married. Do you hear me, I. Marlene King? I’m talking to YOU!

Luckily, I think that this Pretty Little Liars creator is probably listening to me. When asked about what couple could get hitched, King told Variety that ‘shippers will be obsessed.

“I think for fans of the original ships, it’s going to be a very magical and rewarding proposal. I cried and a lot of people cried at the table read for that episode, and I really cried when I saw it. You don’t have to wait for the finale to see it. I think it’s going to make a lot of people happy!”

Ashley Benson, who plays Hanna, told Us Weekly that “fans are going to be super satisfied with how [the show] ends,” and that Hanna and Caleb “will always have a happy ending.” Tyler Blackburn, who plays Caleb, told TVGuide that Caleb is ready to get hitched to Hanna. “I think he would be willing to,” he said. “Yeah, absolutely. I think that ... they're just meant for each other.” I’m no mathematician, but all of those non-answer answers seem to point that Haleb will be joining officially as one. None of the other couples on the show are as solid as Caleb and Hanna are right now, and plus, they’re the best couple on the show. Pretty Little Liars Season 7B better include a Haleb wedding or else ‘shippers across the globe will not be happy.

More like this
The 'PLL: Original Sin' Creators Say A’s Identity Will Be “Very Clear” By The Season Finale
By Alyssa Lapid
Every Horror Movie Reference In The 'PLL: Original Sin' Premiere
By Alyssa Lapid
'A League Of Their Own' Star Abbi Jacobson Is Engaged To Jodi Balfour
By Jake Viswanath
Here’s How You Can Watch Season 3 Of 'Never Have I Ever' In The UK
By Frances Stewart
Get Even More From Bustle — Sign Up For The Newsletter