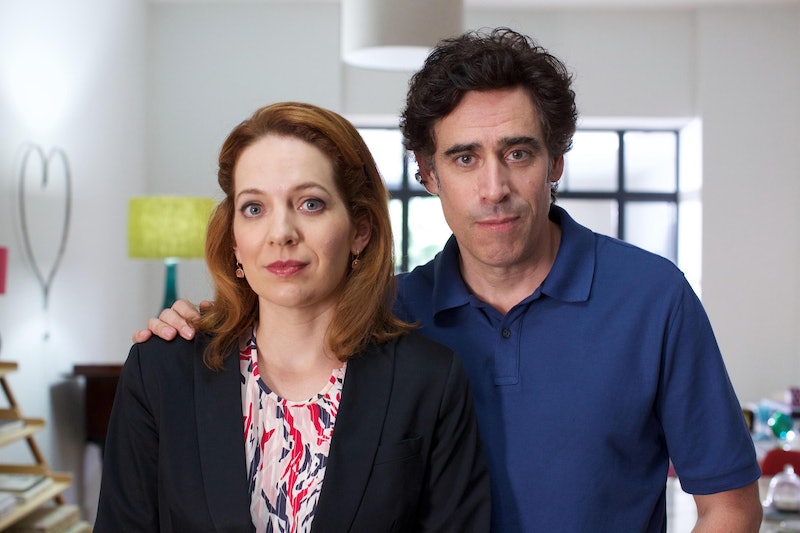 If, like me, you've become a fan of the Channel 4 comedy series, you're probably wondering, will there be a Hang Ups Series 2? The six-part series comes to an end on Wednesday [Sept. 12], so what's the deal? Is this going to be the last we see of Richard and Issy Pitt? Say it ain't so.

Well, there's no real official word, but a Channel 4 representative has said that until the last episode airs, no decision will have been made yet over whether there will be a second season of Hang Ups. However, they also mentioned that after the final episode (which broadcasts in just a few hours' time), that they would be able to get back to me with a clearer answer. Personally, I am hoping no real news is good news, right?

The Channel 4 series has been a hit with comedy fans, featuring Stephen Mangan as the lead character, Dr Richard Pitt, who's facing a number of complications in his life. One day, after a disastrous group therapy session he's running, Dr. Pitt decides to begin conducting his one-to-one sessions with patients via webcam through mainly quick-fire questions and answers. Much of the work is improvised and the scenes, which showcase his patients and their many anxieties and neuroses, are entertaining and comedic despite the sometimes serious nature.

Hang Ups also follows Dr Pitt's complicated home and family life, which threatens to push him over the edge. He has teenage children and a mother who suffers a fall, for example. "He’s got a house full of teenage kids who all want his attention, he’s got a supervisor on his back, his parents are causing him problems, as are his siblings," Mangan added. "He’s got a mountain of problems of his own, and he’s trying to stay calm and help his patients deal with their problems at the same time."

In case you didn't know, the show is in fact a remake of hit American series Web Therapy, which saw my fave Friends star Lisa Kudrow at the helm. Go Pheebs. In Hang Ups, Mangan is basically stepping into the shoes of Kudrow. However, the Channel 4 series isn't just a British remake of the US programme; it's a new, fresh take on the original, and has an undeniably British twist, especially when it comes to the comedy.

As well as Mangan, we've seen a plethora of famous faces over the past five episodes, including Richard E.Grant, David Tennant and Jessica Hynes. If a second series does come to fruition, I wonder who welse will be taking part? In my opinion, I can totally see comic figures such as Extras star Ashley Benson and Love Actually's beloved Kris Marshall fitting in to the show well. Here's hoping.