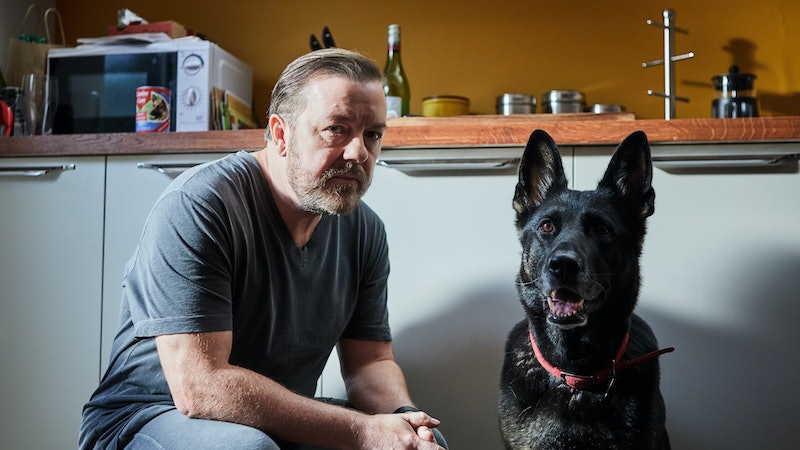 Ricky Gervais' After Life centres around a local newspaper journalist, who after the untimely death of his wife, struggles to come to terms with a new normal. The black comedy's second series recently dropped on Netflix, and appears to have left fans with some burning questions. So, will there be an After Life season 3? Here's everything we know so far.

Given that the comedy-drama only just landed on the streaming platform, it's no surprise that news surrounding a third series is yet to be announced. I have reached out to Netflix for comment, and will update with any new information the minute it becomes available.

In a recent social media interaction, series creator Gervais disclosed to a fan that he has "got a few ideas" regarding After Life's potential third run — and speaking to the Metro, revealed that he would be open to the show's return.

"The answer is I don’t know about series three," the Office star explained, before adding "If this goes down a storm and Netflix call me, you know, next week and go 'listen, it’s gone through the roof. Everyone loves it. We’d love to do a third,' then I would."

So, although this is hardly confirmation, this could indicate another series is indeed on the cards. But for now, at least, we'll just have to wait and see.

Gervais stars in the series as an unsociable journalist named Tony, whose life is turned upside down after his wife passes away from breast cancer. Tony then decides to punish the world by doing whatever he pleases without consequences. However, his plans are soon put to halt by the kindness of people around him.

As iNews reports, the show's second season revolves around Tony's realisation that everyone appears to be struggling with their own problems, which inspires him to become a better friend and colleague.

Speaking to the Yorkshire Evening Post, Gervais previously discussed how the character of Tony can act as a vessel to say "all the things that polite people are afraid to say."

"You can't make a joke that someone, somewhere, won’t find offensive, so you shouldn’t try," the comedian explained. "I thought, 'that's perfect. I can create a character that can say all the things that polite people are afraid to say; he's got nothing to lose."

In addition to Gervais, the cast of After Life includes Kerry Godliman, Ashley Jensen, Roisin Conaty, Diane Morgan, Tony Way, and Mandeep Dhillon, among others.

After Life series 2 is available to stream on Netflix.