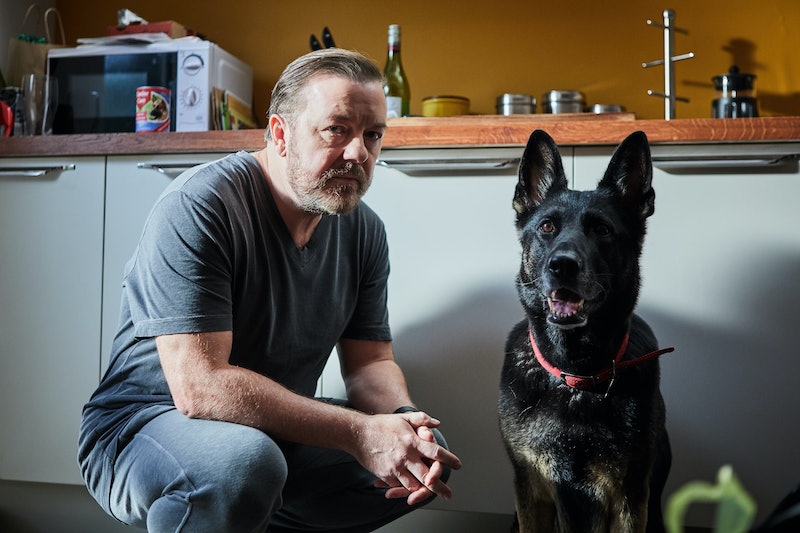 Ricky Gervais has never been hesitant to share his opinions — no matter how blunt or controversial. His After Life character, Tony, similarly says whatever he wants, but though Gervais created and stars in the show, Tony isn't based on a real person. Still, Gervais has said that of all the roles he's played, he has the most in common with Tony.

The character's personality will be pretty familiar to Gervais fans, but his backstory is quite sad. After Tony's wife dies of cancer, he doesn't think his life is still worth living, so he decides to lash out at the rest of the world by saying every miserable, horrible, and brutally honest thing that comes into his head. While he watches videos of happier times with Lisa, this is no Ghost Town (his 2008 film with Téa Leoni and Greg Kinnear). He's dealing with grounded, true feelings of grief and sorrow. He can't communicate with his dead wife anymore and because of that, Tony can barely see the point of living, let alone playing nice.

In a preview for an upcoming podcast interview for Series Linked, Gervais said that every character he's played has been "semi-autobiographical, but that Tony is the "closest" to him. "Obviously his circumstances have changed, but I think it is him," Gervais explained, per the UK Mirror. "I don't want to be that guy having a fight on an airplane, so I have to bite my tongue more than I ever did. But, no, I want peace and quiet, and I do go round thinking like Tony does."

Like Tony, Gervais also has a love of his life — although his partner Jane Fallon is very much alive. Gervais and Fallon have been together since they met in college in 1982, and he said in the podcast he couldn't imagine life without her. "Jane went to Brighton once to visit her mum, and the boiler went and I didn't know how to do it and I couldn't get the telly working, so I sat for two nights ... and honestly, it was like Castaway. I was on the couch under a blanket with the cat listening to internet radio cause I couldn't get the telly working. And then when she went away, next time, she left me instructions. She drew a picture of the remotes and what they all did, and I still had to FaceTime her," Gervais shared. "So I would fall apart — I mean obviously, emotionally first. I don't know how I'd cope with it. You don't know, do you?"

One scene in particular that Gervais credited as coming from his own life is a flashback of Tony and Lisa "partying" on the couch with a bottle of wine. Gervais told The Telegraph that this scene is something that he and Fallon do most nights. "There has to be a really big thing to compete with that," Gervais said.

He also clarified to The Telegraph that while he has experienced grief with the deaths of his father and his mother, he has never felt suicidal nor has he tried heroin as Tony does in After Life. Instead, Gervais is just trying to show the truth of humanity, which often is a mix of sadness and humor. As The Office creator told the UK's Metro, that's where his bluntness — and potential offensiveness — comes in. "Maybe people don't see this kind of story on TV too often, but it is real life. Me and my siblings joked at our dad's funeral. That's the reality," he said. Gervais also explained why he goes for reality-based storytelling in the below interview with the UK's Capital FM.

"There's a real human side and there is tragedy and there is pathos and it's not all roses and there's flawed characters," Gervais said about his work to Capital FM. "I deal with reality and no one's perfect. ... We're all flawed. We've all got problems. We all live in our own heads. We're all a bit screwed up and I put that in. And I put that in for better or worse."

So while there's no real-life Tony out there mourning the loss of his wife, After Life may resonate with viewers. Because even if not many of us feel free enough to speak our minds like Tony, his emotions are what being human is all about.