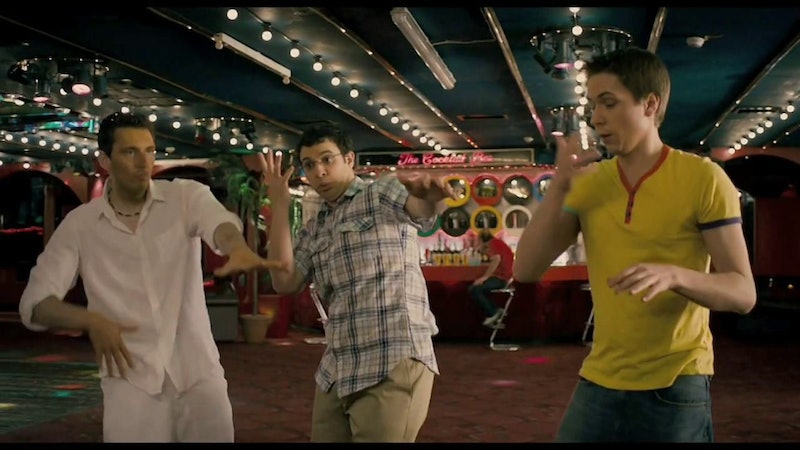 The Inbetweeners became nothing short of a comedy phenomenon when it debuted on British TV back in 2008, and due to the sitcom's massive success, the series went on to spawn not one, but two films — each of which brought in impressive numbers at the UK box office. Ever since The Inbetweeners Movie 2, there have been speculation of a potential third film, especially from fans of the franchise. But will there be an Inbetweeners Movie 3?

There is currently no news surrounding an Inbetweeners Movie 3, however, actor James Buckley, who portrayed Jay Cartwright in the series, has given a lifeline of hope to those desperate for a third Inbetweeners outing. According to Lad Bible, during an appearance on The Inbetweeners two-hour reunion special, which celebrated the 10th anniversary of the show, the 31 year old confirmed that he would indeed be up for third movie. The Channel 4 special, titled The Inbetweeners: Fwends Reunited, saw Buckley join co-stars Simon Bird, Blake Harrison, and Joe Thomas for a chat about their time working on the iconic show.

The Inbetweeners followed four sixth-form students (Will McKenzie, Simon Cooper, Jay Cartwright, and Neil Sutherland) as they lived out their awkward teen years at Rudge Park Comprehensive. The series originally ran for three seasons between 2008 and 2010, according to IMDb, and the accompanying films were released in 2011 and 2014, respectively.

News of the New Years Day reunion episode, which saw the famous foursome get together for the first time in four years, sent fans into overdrive. However, according to Digital Spy, many viewers were let down by the content of the episode, as it a chat show rather than actual new episode of the sitcom. As reported by the BBC, Buckley took the reaction of fans to heart, and in an apology tweet, the actor said: "Feeling pretty hated right now. Im sorry to anyone who feels let down with last nights show. Im especially upset as it really is the fans that made the inbetweeners a success, it certainly wasnt me. I might do an explanation video on my YT, or might just leave it & move on #sorry."

However, not everyone watching the reunion was so critical, and the Inbetweeners star clearly has nothing to worry about, because after revealing his support for third movie, fans took to social media to express their joy.

While fans of The Inbetweeners may be waiting a while before anything new comes along, there is some other exciting news to look forward to: Damon Beesley and Iain Morris, the pair who wrote and created The Inbetweeners, have revealed plans for a brand new sitcom. According to the British Comedy Guide, the comedy duo's new project, Afternoons, has been commissioned as a full six-part series for BBC Two. This will be the first series Beesley and Morris have worked on together since the release of The Inbetweeners 2, and an early premise for the upcoming show reads, "The stories focus on their friendship, as these boys from around the world are far less proficient with women, money and social media than they are at scoring goals."

So, if another Inbetweeners instalment isn't meant to be, fans at least have something new to look forward to.