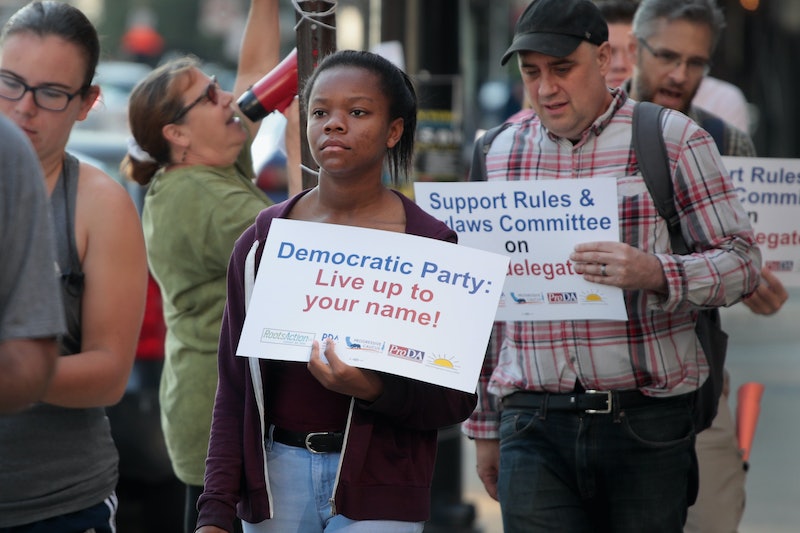 The 2020 presidential election is bound to be a barn burner, in more ways than one. In addition to a highly competitive field of Democratic candidates, how some delegates vote for their party candidate this summer will look a little different. So for those wondering if there will be superdelegates in 2020, the answer is yes — but their role has changed.

According to Vox, there were 4,763 total delegates who determined the Democratic candidate for president in 2016; of those 4,763 individuals, 712 of them were superdelegates. Vox further notes that the breakdown of who gets to be a superdelegate is pretty simple: superdelegates are either very influential Democrats (like Bill Clinton), or members of the Democratic National Committee. It's worth noting that superdelegates for the Republican Party do not have the freedom to vote for whoever they want, but rather they have to represent the will of their state, just like normal delegates.

But in 2020, the role of the superdelegates in the Democratic Party is about to change.

In August, Democratic Party officials voted for a measure that will significantly decrease the power of superdelegates in future presidential elections. In previous years, superdelegates have voted at the same time as delegates, but now, superdelegates won't be allowed to vote on the first ballot at a national convention.

The new rules reflect a direct effort by the Democratic National Committee to make the entire process more democratic. Specifically, to make everyday people feel like their votes have a direct impact on the presidential candidate selected to represent the party.

In an interview with The Chicago Sun-Times in August, DNC Chairman Tom Perez said the new measure was "about building trust ... And they’re about making sure that people feel excited to be Democrats."

We have a 2020 election cycle right around the corner and our goal is very simple. We want to make sure that every person who runs and everyone who participates feels like the process is fair. And our reforms are designed to increase participation in primaries, make caucuses where they exist more inclusive and addressing these issues of superdelegates that you mentioned.

Perez concluded with a simple statement that explained everything you need to know about the direction he wants the party to move towards. He said, “By limiting the influence of superdelegates, it sends a very, very important signal to our voters that we are indeed the party of the grassroots.”