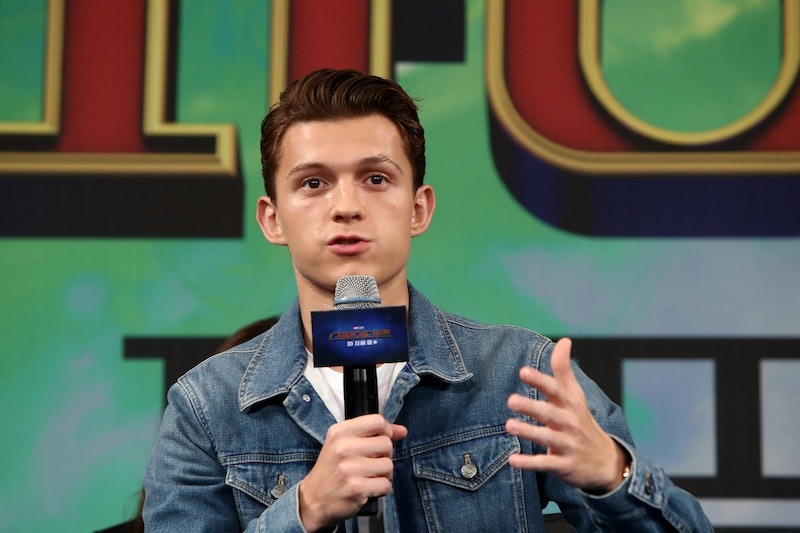 The MCU may be about to experience a major change. Thanks to a reported dispute between Sony Pictures and Disney, the Tom Holland-led Spider-Man could be leaving the Marvel Cinematic Universe for good. But what does this mean for the leading actor himself? Will Tom Holland still be a part of Spider-Man? The movie franchise is reportedly parting ways with Disney and Marvel Studios President Kevin Feige, according to Deadline, but this may not be the last you see of Holland's Peter Parker.

Deadline's sources are claiming there are two more Spidey movies happening with Holland as the lead and Jon Watts as the director. Hours after the news broke, Sony Pictures released a statement obtained by Bustle, saying:

(Bustle has reached out to representatives from Sony Pictures, Disney, Marvel, and Tom Holland for comment on the whole situation.)

While this update seems to imply that the split would not have an immediate impact on Holland's Peter Parker character — since he would lead the next two Spider-Man movies — it could still affect whether he'd be a part of future MCU films, including crossover movies like The Avengers franchise.

Meanwhile, an inside source told Deadline that Sony is not worried about parting ways with Marvel's Feige and Disney, because the foundation for the films has already been set. That same source explained,

"The creative template has been set on the Spider-Man films, and [director Jon Watts] and Holland are in place along with Amy Pascal, who became producer with Feige after she exited the executive suite after presiding over the previous Spider-Man iterations directed by Sam Raimi and Marc Webb as Sony Pictures chief."

In essence, yes, there are some major pieces of the puzzle that could be changing, but it sounds like there's a solid team to keep this Spidey franchise going, including Holland himself. Plus, remember that there's a lot up in the air right now, and at this point, this news has simply been reported; there have not been any official comments from Marvel/Disney, Feige, Sony Pictures, or Holland.

Even so, it's understandable that fans are devoted and can't help reacting despite an official-official confirmation of the shake-up. There are just so many unanswered questions popping up on Twitter:

How Does Tom Holland Feel About This?

These Twitter users were concerned about Holland's feelings in regard to this major change. And that is such a good question.

Is This Even True?

Some fans were so upset by the prospect that it was a trouble to even accept the possibility that the news could be true. (Again, nothing is set in stone yet, though.)

Will Tom Holland Get Replaced?

Then there were other Spider-Man fans concerned that Holland might be left behind along with Disney and Marvel Studios.

For now, it's very much a wait-and-see situation. Some fans might be excited about the possibility for the Spider-Man saga to become its own independent entity with Sony. Then, there are (many) others who are truly saddened by the end of the era and the exit of the iconic character the MCU.

Still, there's a bit of a silver lining here: There are at least two more Holland-led movies left to go. Not only that, but working on those two movies means that there will be plenty of time for the restructured Spider-Man team to get things together and produce a high-quality film that both Holland and the fans will be satisfied with.

Editor's note: This post has been updated with a statement from Sony Pictures.