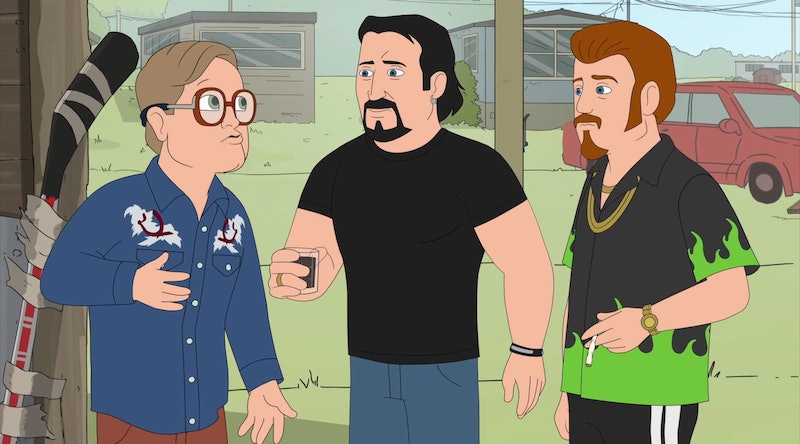 Trailer Park Boys has followed the big dreams and petty schemes of Ricky, Julien, and Bubbles for over a decade. At the end of Season 12 — after eating way too many magic mushrooms in a jail cell to keep from getting caught with the drugs — the boys were transformed into animated characters, ushering in the launch of the spinoff Trailer Park Boys: The Animated Series. And with Season 14 now available to stream on Netflix, just one question remains: will Trailer Park Boys: The Animated Series return for Season 15?

There's been no official word from Netflix as to whether the animated series has been picked up for another season. But in the past, fans of Trailer Park Boys haven't been given much warning ahead of the show's release. Just take the February 2019 announcement of the March 2019 release of Season 13.

The animated series is both a continuation of and workaround for the live-action series. Actor John Dunsworth, who played trailer park manager Jim Lahey, died after a sudden illness in 2017. But the magic of animation allowed Trailer Park Boys to give his character a fitting in-show farewell, in which he was he's carried off in the first animated episode by a "sh*t hawk", returning as a liquor ghost to give the park to his lover Randy. Because animation has no physical limits, the show's gotten even more surreal and outlandish, with the boys even going to space. But Trailer Park Boys may head back down to earth soon.

After a few teasing Instagram and Facebook posts back in September and October 2019, it seems there's something live action brewing in the Trailer Park universe. The project centers around the Sunnyvale Correctional Facility, the fictional jail we last saw the boys chomping mushrooms in. And according to SwearNet, the official site of all Trailer Park Boys-related projects, the filming was part of a 19-day live action shoot was for an as-yet unofficially titled jail series.

Actor Michael Smith, who plays Bubbles, directly confirmed the live action jail series last May on Twitter. Whether what they're working on becomes the official Season 15 or a side project, fans can rest assured that there's more coming from IRL versions of Julian, Ricky, and Bubbles in the very near future.