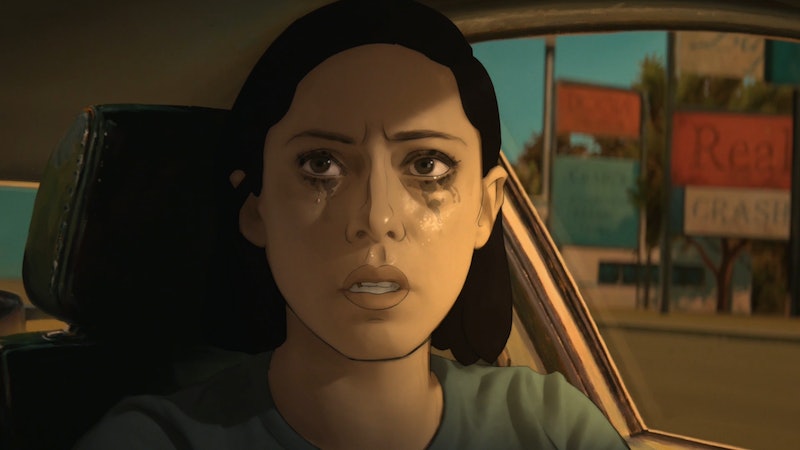 Spoilers ahead for Undone Episodes 1-5. When you learn the world isn't the boring, humdrum place you once thought it was, you gotta explore that, right? Well, even though Amazon hasn't announced if Undone will return for Season 2, fans of Undone will definitely want to keep exploring Alma's story. Not only does Undone show that reality isn't what it seems with Alma's (Rosa Salazar) time-jumping, but this new way of existing could have some very real consequences when it comes to her mental health or family life. Her dead father (Bob Odenkirk) exposed Alma to her abilities so she can stop him from being murdered 20 years earlier. But if Alma succeeds in doing that, what would the rest of her life look like? That's just one of the absurdly many avenues a Season 2 of Undone could go down if this unique series gets renewed.

Update: On Nov. 21, Amazon Prime announced that Undone was renewed for Season 2 and that creator Kate Purdy had signed an overall deal with the streaming network, according to TV Line.

Undone's use of rotoscope animation is mesmerizing, but the show by Kate Purdy and Raphael Bob-Waksberg of BoJack Horseman is also innovative in the way it portrays both real-life and unimaginable circumstances. While Alma's journey with her dead father is mind-boggling, the series is grounded in reality due to Alma's raw relationships with her mom, sister, and boyfriend in the regular world. Those factors alone should get it a second season. But there's also so much to address when it comes to the mystery elements. Like, who supposedly killed her father Jacob? And if she can travel back in time to stop his murder, what does life become then? Or, is this the onset of the same schizophrenia that her grandmother had and none of this matters? It's a lot to unpack.

Alma's dad said he caused her car accident because she can live a limitless life that allows her to travel through time. He was researching this phenomenon when he claims he was murdered because of his work. So once he trains Alma how to control her large-brain-ventricle-given talent, she could drastically change her family's history. (Not to mention, she might have the skills to change history in even more significant ways.)

Her family dynamic and how she grew up would all be altered if her father never died that fateful Halloween night when she was 8. But if she succeeded in stopping his murder, could Alma still access the life she had once lived? Would she still be holding onto all the hurt she felt because of her dad's death? Would she ever have had a life with Sam? Would she still be able to access all of time? Then, there's the question if her dad is being wholly honest with her. After all, he has been manipulative by isolating Alma and he seems to withhold information, like about the nature of his relationship with his TA Farnaz. Does he have an ulterior motive that has nothing to do with his alleged murder at all?

Viewers also can't ignore the slight chance that Alma is experiencing delusions and could potentially have schizophrenia like her grandmother was thought to have. While Jacob indicates that her grandmother was wrongly misdiagnosed because of society's perceptions of what's real, Alma could be struggling with her own mental health and the visions of her father is a manifestation of that.

Viewers might never know for certain since creators Purdy and Bob-Waksberg told UPROXX they want Alma's experience to be open to interpretation. "We're never saying whether she's absolutely mentally ill or she's actually having this experience," Purdy said. This uncertainty may come to a head in the final episodes of Season 1 since in the last episode available to the media for review, "Alone In This (You Have Me)," Alma confessed to Sam about her new mind-altering life. Sam may worry that Alma has a serious mental health issue and recommend that she seek help, just as her father warned.

And if Sam tells Alma's mom, Camila would most certainly recommend in-patient treatment and medication — and the visions of her father could stop. Maybe that would be the healthiest for Alma if she is truly experiencing delusions. But if what her father says is true, their work would be left unfinished and he would have to find a new way for Alma to realize her abilities.

While it would make for a far less fantastical story if Alma was in the real world with a serious mental health issue, it would still be one very much worth following. Because no matter how Season 1 of Undone ends, Alma's journey will leave you wondering about all the different ways we process reality, heartbreak, and trauma. But, if she really can time travel, the possibilities for Alma and her father — and a Season 2 of Undone — are all the more infinite.