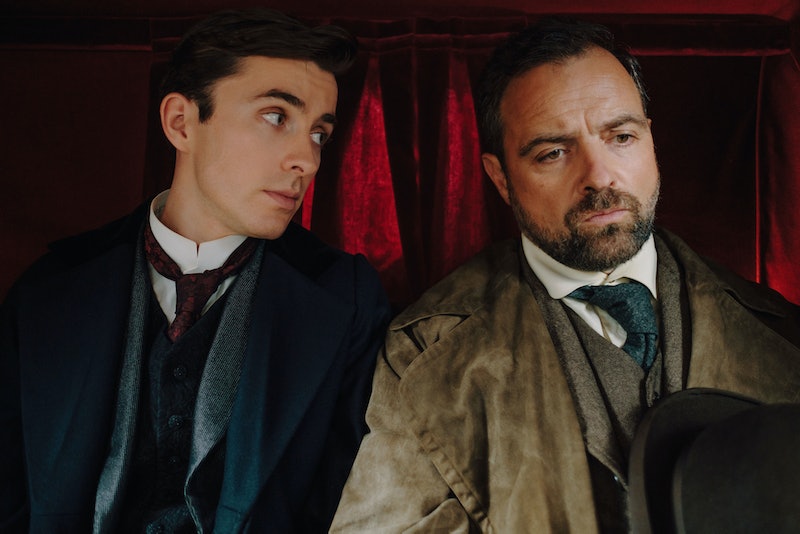 Running for three episodes, BBC's adaptation of the Liebermann Papers book series ends tonight (Dec. 2). Starring Matthew Beard and Juergen Maurer, Vienna Blood follows a doctor and a detective inspector as they investigate crimes on the streets of 1900s Vienna. When the show was first announced, it wasn't described as a limited run so will Vienna Blood return for series two?

There's not a lot of info swirling around about Vienna Blood continuing, so I reached out to the BBC for more insight. I've yet to hear back, but I'll keep you posted if I do. Regardless, there's a lot of content for the series to cover, as author Frank Tallis' Libermann Papers series contains six books. As is with many book-to-telly adaptations, the narratives of one book can often be mixed with others in the series, as seems to be the case with the Liebermann Papers.

Vienna Blood is the second book in the series, which begins with Mortal Mischief and concludes with Death and the Maiden. Each book follows a similar format, with Oskar and Max investigating peculiar cases around the Austrian capital. Tallis tackles this by combining investigative crime with psychoanalysis, as the two "have much in common" as he told BBC Two. "Clues are like symptoms, and the detective is like a psychoanalyst, attempting to make connections in order to find an ultimate cause."

"A perpetrator is as elusive as a repressed, unconscious memory," the author added. Founder of psychoanalysis Sigmund Freud was a significant influence for Tallis' work, who is mentioned frequently in the novel.

"Freud was very aware that psychoanalysis and police detection are close cousins. In fact, he pointed this out in one of his lectures. It is also interesting that Freud was a great fan of detective fiction," Tallis said. "One of his patients (known as The Wolfman) wrote a memoir and in it he reveals that Freud — who we usually think of as a reader of Sophocles and Dostoevsky — was a great fan of Sherlock Holmes!"

Both the book and TV series have also been compared to Arthur Doyle's Sherlock Holmes — especially the telly adaptation as its writer also worked on BBC's Sherlock. But despite its similarities, the series has its own spin on the investigation genre. "The show is about a birth of science. It's about the birth of psychiatry, neurology, and the understanding of the human brain and it's essentially a crime thriller but the main relationship in the series is between two men," Thompson explained. "[A] policeman who is trying to solve a murder and a young psychiatrist from the hospital who he consults to help him build up an understanding of the killer."

More like this
Everything To Know About The 'Daisy Jones & The Six' TV Series
By Maxine Harrison and Brad Witter
'Boiling Point's TV Sequel Is Set To Deliver A “Rollercoaster Of Emotions”
By Catharina Cheung and Sophie McEvoy
Armani Jackson Is Following In His Famous Actor Sister’s Footsteps
By Catharina Cheung
The Banned 'Friends' Ad Shows Monica As You’ve Never Seen Her Before
By Sam Ramsden
Get The Very Best Of Bustle/UK
Sign up for Bustle UK's twice-weekly newsletter, featuring the latest must-watch TV, moving personal stories, and expert advice on the hottest viral buys.