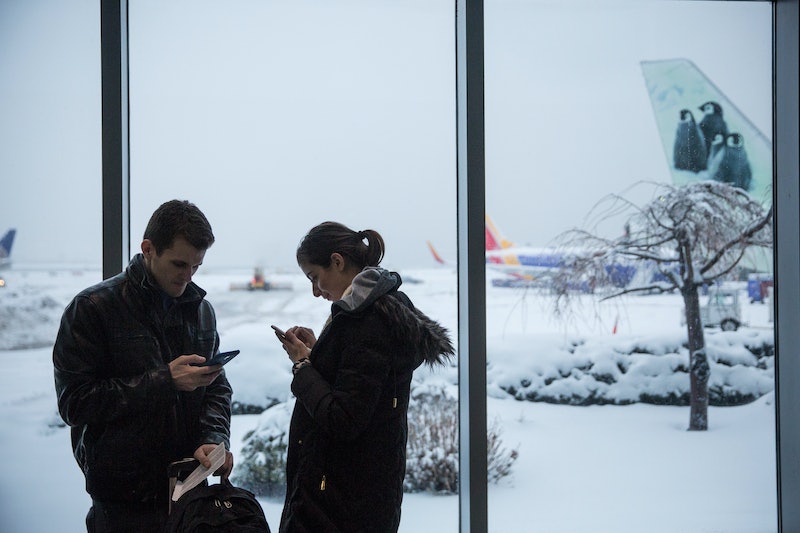 Winter Storm Quinn is currently headed toward the Northeast, with the storm expected to heavily affect the area on Wednesday and Thursday. As several states have declared a state of emergency in anticipation of the storm, many people are probably wondering how their travel plans will be affected — and whether or not Winter Storm Quinn will affect flights. So far, several airlines have cancelled flights and are also taking precautions to allow people flexibility if they have travel planned during the storm.

According to USA Today, over 1,700 flights are already cancelled through Thursday. The paper noted that Flightaware counted that, thus far, 1,600 flights were preemptively called off for Wednesday, as were 180 for Thursday. Many airlines that operate out of east coast cities have also announced that they are waiving ticket change and cancellation fees for people flying to or from areas that will be affected by the storm.

As reported by Money, Winter Storm Quinn is expected to produce up to a foot of snow in major east coast cities, including New York, Philadelphia, and Boston. Quinn constitutes the second severe winter storm to hit the area in a week, as Winter Storm Riley wreaked havoc on the region (and caused the cancellation of around 4,000 flights last week).

If you are traveling through the Northeast in the next few days and wish to see if your flight is eligible for a fee waiver for changes or cancellations, Money complied a very helpful list of individual policies by airline that you can view here. Generally, it seems like most airlines are offering free flight changes, and some are offering free cancellations/partial refunds, if you are flying to or from certain Northeast cities on days when the storm is expected to most heavily affect flight traffic.

In addition to affecting air travel, Winter Storm Quinn is also expected to profoundly affect public transport and roadways in several major cities. New York City's Metropolitan Transportation Authority (MTA) chairman Joe Lhota told the Brownsville Patch that the storm will probably have a "significant impact" on the subway system in the city and could also cause delays to bus services as well. "The MTA is taking this storm very, very seriously," Lhota said. "We're ramping up all of our operations and we will be prepared."

In Boston, transportation officials have already announced the closure of several shuttle bus routes. They also expressed concern about people driving during the storm and encouraged motorists to stay off the roads. Indeed, Massachusetts' Highway Administrator Jonathan Gulliver noted on the state transportation department's website, “This storm will bring heavy snowfall to areas across the state throughout Wednesday and into Thursday, which could create hazardous travel conditions ... We advise members of the public to stay off the roads if possible, consider working from home or postponing travel plans and taking public transit if they must travel during this storm ..."

According to the New York Times, Amtrak has also already cancelled some train services in the Northeast region, including some Keystone Service, Empire Service, Acela Express, and Northeast Regional trains.

Overall, it appears that many transport providers, including airlines, are taking precautions to help counteract the presumed delays that will be caused by the storm. That being said, of course, the storm's effects could still be unpredictable and it could cause further unanticipated issues. If you are flying (or taking public transport) in the Northeast in the next few days, it is likely best to regularly check the status of your flight or other mode of transport, as plans could readily change as the storm unfolds.