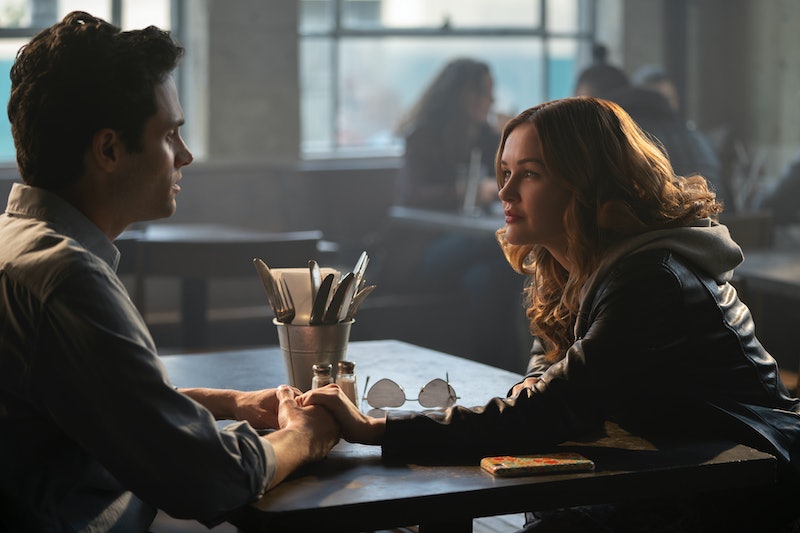 Spoilers for You Season 2. So: that ending. We knew that Joe Goldberg moving from New York City to Los Angeles would spell change for YOU's universe, but who could predict how different Joe's life would be by the end of Season 2? By the finale, we learn that there's not just one but two unhinged killers in LA: Joe and his girlfriend Love. They're smitten with each other, and oh, they've settled down with a white-picket fence and a baby on the way. Though we don't know yet if YOU will return for Season 3, that ending just begs for answers, especially because an important detail from the books was left out about Joe's fate.

Though there's no green light yet for YOU's third season, producer Sera Gamble told Cosmopolitan that she hopes the higher-ups will give them a chance to continue. "I will say that we have an idea for season three that is SO exciting that people talk about it in the [writer's] room everyday," Gamble explained. "So my fingers are crossed."

Unlike the past two seasons, we can't glean any hints about what Gamble is referring to from the source material, since we've officially run out of books from Caroline Kepnes, the author behind You and its sequel, Hidden Bodies. The only think we know is that Kepnes is working on a third YOU book, as her Twitter bio humorously reads, "Yes, I’m writing a third Joe book. No, I’m not done yet."

We can say that there is one major plot thread that was left out of You's Season 2 adaptation of Hidden Bodies, though. By the end of the book, the police start putting two-and-two together about the trail of bodies behind Joe. (It doesn't help his case that in the book he kills a cop.) A tip from Dr. Nicky — the therapist wrongly serving time for Beck's murder — leads the cops straight to Joe. Though Love and her family equip him with the best lawyer, Joe still ends Hidden Bodies in jail, his fate up in the air. He's confident that Love's connections will free him and he'll be able to return to his perfect life with his pregnant girlfriend, but who's to say he succeeds?

This twist is a pretty major detail to leave out of the show, and if You gets a third season, the show could pick up with the cops showing up at Joe and Love's doorstep right after they move into their new house. The rest of the season could be a legal drama about the case against Joe, which we can only assume Kepnes' third book is about. There's definitely dangling threads that need tied up: the jar of pee in Peaches house, for example, plus Dr. Nicky and Officer Finch's suspicions of Joe, and the fact the Ellie will probably eventually look into her sister's death.

Another, maybe more intriguing option for a third season though is to go off of that strange footnote at the end of Season 2. By the end, it seems like Joe's gotten everything he could ever want: a stable family home, a daughter, and a girlfriend who loves him truly unconditionally. He seems satisfied finally, and yet in the last few moments he peeks through the boards of the fence to spy on a woman reading by the pool. "Oh hello you," he narrates as dreamy music plays, in the same way he did for both Beck and Love. Does this mean his obsession for another woman is beginning again? Like all serial killers, is it actually impossible to sate his urges to chase, and own, a woman he can't have?

The difference this time is that Love is an all together different monster than the women Joe has been involved with in the past. Love murdered Delilah and Candace in order to preserve her and Joe's relationship, so we know she's capable of anything. Though it's not yet clear if Love would ever turn the knife on Joe if he cheated, we know for sure she has no compunctions about killing women who threaten their family. If Joe does end up cheating in Season 3 and it leads to some cat-and-mouse game between these two killers, heaven help anyone in Los Angeles who gets caught in between.

More like this
'The Sandman’s Ending Is A Departure From Neil Gaiman’s Comic Book Series
By Kadin Burnett
Does 'Locke & Key’s Ending Mean There Could Be A Season 4?
By Sophia Moore
Everything To Know About 'Evil' Season 4
By Meguire Hennes
‘The Simpsons’ Will *Finally* Address How They “Predict The Future”
By Sam Ramsden
Get Even More From Bustle — Sign Up For The Newsletter