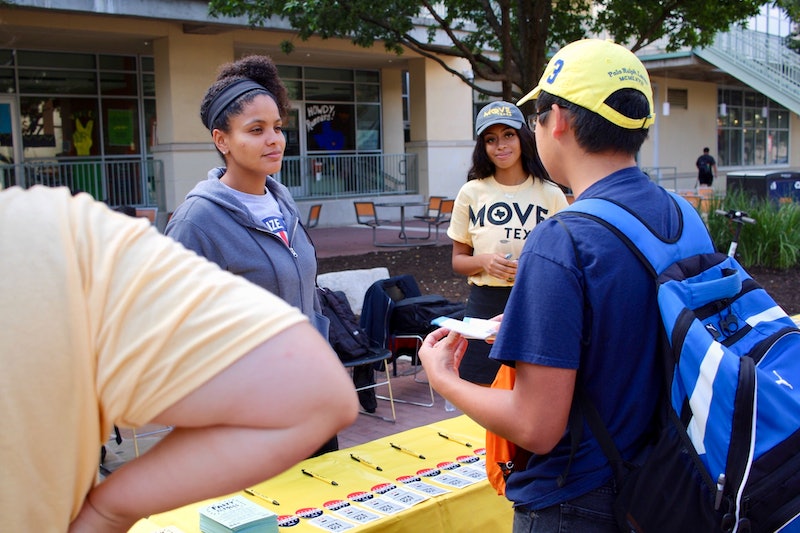 Members of MOVE Texas at a Party at the Polls event at UTS. Photo: Adrian Aguilera
By Alicia Menendez
November 2, 2018

“Will young people turn out to vote?” And more to the point: “Will they sway the election?” It’s a perennial line of questioning, usually posited in a resigned tone that presumes the answer is, “No, they’re too busy drowning in student debt.” As someone who has been asked this question many times over, I often get the impression that the person asking it would lay full responsibility for participation at the feet of the 18-to-35-year-old set, without any regard for whether our voting system is built for optimal participation, or whether would-be voters are being properly engaged.

To truly understand voter participation among millennials and Gen Z requires understanding the system in which they participate, their progressive leanings yet ambivalent relationship with political parties, and the peer-to-peer engagement necessary to prompt turnout. It also means entertaining the possibility that success is not defined exclusively by national numbers.

The challenges to getting 18- to 35-year-olds to vote are myriad: Many are first-time voters, so they may be less familiar with the process. Midterms don’t evoke the same enthusiasm and turnout as a presidential election for voters in general, regardless of age. Youth participation in midterms has slowly declined over the past several cycles, sinking in the most recent midterm elections in 2014 to 20 percent, a 20-year low.

In addition, some states make it easier to vote than others. Young Coloradans vote at higher rates than many of their peers across the country, thanks in part to the Voter Access and Modernized Elections Act of 2013. That legislation brought a number of changes to the state’s voting system, including in person same-day registration, a shortened residency requirement for registration, mail ballots for all registered voters, and access to polling centers where any voter in a county can cast a ballot before or on Election Day. In contrast, Texas consistently ranks among the worst states for voter turnout, in part, organizers argue, due to limited poll access and onerous voter ID laws that disproportionately affect communities of color. (Voters can’t use out-of-state driver’s licenses or student IDs, for instance, but they can use a handgun license.)

Young voters also have a complicated relationship with political parties. A Pew Research poll from March found that millennials (defined by Pew as those born 1981 to 1996, roughly 22 to 37 years old) have the highest proportion of independents of any generation, but when their partisan leanings are factored in, they’re also the most Democratic. A majority (59 percent) of millennials identify as or lean Democratic, while 32 percent identify as or lean Republican.

We try to have every conversation about the issues rather than talking about 'vote for this party or that party.’

For those on the right, those numbers provide less obvious incentive to engage these voters. “Republicans hold the view that young voters are hard to turn out, especially in a midterm, and when they do turn out, they break heavily for Democrats,” Kristen Soltis Anderson, a Republican pollster and author of The Selfie Vote: Where Millennials Are Leading America (And How Republicans Can Keep Up), tells Bustle. “So when they’re assessing where to put resources, the cost-benefit ratio just doesn’t feel like it makes sense in this kind of midterm environment.”

Even NextGen America, a millennial voter engagement group committed to helping Democrats win, doesn’t focus overtly on party. "We try to have every conversation about the issues rather than talking about 'vote for this party or that party,’” says Aleigha Cavalier, the group’s communications director. “We're pretty clear that Democrats are always going to be better than Republicans on issues that young people care about, whether it's climate change or health care or women's issues. Young people are progressive even if they're not enchanted with a certain party.”

Millennials’ and Gen-Z’s affiliation with the Democratic Party means that questions about turnout are often tied to questions about the party’s performance. But for many of the youth organizers Bustle spoke with, party politics are besides the point. “Growing power is not necessarily seeing one party win over the other,” Raven Douglas, deputy director of MOVE Texas, a grassroots, nonpartisan group committed to giving youth a voice in politics, tells Bustle. ”It's making sure that young people have a voice at the table, that candidates listen to us, and knock on our doors, because that's not what's happening right now.”

The national youth organizers Bustle interviewed, along with state organizers in Colorado and Texas, say the potential voters they have spoken with are motivated by a wide range of issues, including the Trump administration’s family separation policy and the Kavanaugh hearing, as well as local issues, such as the Flint water crisis among Michigan voters and rising sea levels among Floridians.

We don’t have the privilege to be passive, because for us, it’s an issue of life and death.

Among Gen-Z, America’s youngest voters, the school shooting in Parkland seems to have had a lasting effect. A September poll conducted by the Education Week Research Center focused on a narrow group of voters, 18- to 19-year-olds, and showed that 63 percent say they plan to vote in November and 40 percent say their level of political engagement has been influenced by school shootings. That is consistent with a September poll of people ages 18 to 24 by the Center for Information and Research on Civic Learning and Engagement (CIRCLE) at Tufts University, which researches the political engagement of young Americans, and the polling firm GfK. The poll found that respondents who said they were actively involved in gun violence prevention are much more likely to vote than their peers. "We don’t have the privilege to be passive," Delaney Tarr, a Parkland survivor and co-founder of March for Our Lives, tells Bustle. "Because for us, it’s an issue of life and death.”

Organizers say that while national and local issues have sparked interest, full activation requires more engagement. "There are expectations for young people to engage when no one's asked them to," Sarah Audelo, the executive director of Alliance for Youth Action, a progressive organization dedicated to growing youth political power, tells Bustle. "Those of us who do engage, we've been asked."

According to Abby Kiesa, director of impact at CIRCLE, framing the youth vote as a question of intrinsic motivation ignores the role of external forces. She says there’s an assumption that “either someone wants to vote or they don’t want to vote, and if they don't want to vote, then they don't care about anything. All the research points opposite of that: The campaign contact and the peer-to-peer outreach is absolutely critical.”

Speak to them, not at them, or about them.

Even in progressive circles, organizers say low youth turnout leads to low turnout expectations, which leads to fewer resources being committed to engaging this part of the electorate. "Young people are generally not contacted because they don’t have enough of a record to show them as consistent voters," Audelo explains. "And they’re young, they’re new voters, so it’s not a habit that has been formed. Plus, voting can be intimidating."

According to Tarr, “the reason we’re not participating is because we’re not being spoken to.” For those who want to engage her generation, Tarr offers this counsel: “Speak to them, not at them, or about them.”

This year, various nonpartisan groups are addressing that need: In the final stretch before Election Day, groups are informing and mobilizing the voters they’ve engaged, distributing targeted candidate guides, following up with text messages and calls, and visiting locations with large youth populations, such as college campuses. MOVE Texas has registered 29,000 new voters, New Era Colorado has registered more than 40,000 people this cycle and Forward Montana tells Bustle it’s registered 7,791 voters across the state.

Given the state-by-state disparities in voting access and organizational investment, the organizers Bustle spoke with are loathe to quantify success by national turnout numbers. “Those numbers lack all context,” Audelo says. Instead, they are defining success as their organization’s ability to turn out the voters they’ve registered, and elections and ballot measures where the youth vote made a difference.

Still, those national numbers look promising relative to 2014 turnout. CIRCLE found that 34 percent of people ages 18 to 24 are “extremely likely” to vote in the midterms. That is consistent with a number of other polls that have found about one in three young people are strongly committed to voting in this election. Previous elections have proven that while intention to vote isn’t a guarantee, it’s a good indicator. The number of 18-to-29 year-olds who have voted early has surpassed 2014 levels in almost every state. Plus, youth organizers point to races where victories were buoyed by increased youth turnout: Ralph Northam’s win in last year’s Virginia governor’s race, Ayanna Pressley’s recent victory in a Massachusetts congressional primary, and Andrew Gillum’s stunning upset win in a Florida gubernatorial primary.

"I don't think we can really predict anything based off of 2014,” Cavalier tells Bustle. “I think we're going to see a surge in 2018 that's incomparable to midterms in recent history.”