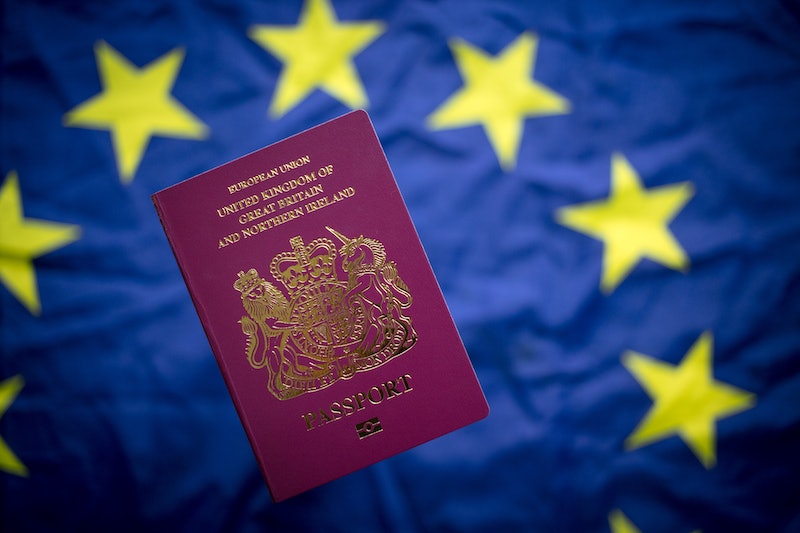 No one, including the government, seems to have a clue what's going on with Brexit. After Theresa May's initial vote was catastrophically defeated earlier this month, MPs and the general public have been asking for Article 50 to either be revoked or extended in order to avoid a no-deal Brexit. But a no-deal could well be a possibility, according to the Prime Minister. For the public, that means potential passport chaos as planned holidays to Europe are put in jeopardy. So will your passport still be valid after Brexit or should you be applying for a new one pronto?

New rules state that any passport issued by the UK, Gibraltar, Guernsey, Jersey, or the Isle of Man will need to have at least six months remaining for travel to any European country in the Schengen area. This zone is made up of 26 countries including France, Germany, Italy, Portugal, and Spain. (Bulgaria, Croatia, Cyprus, and Romania do not form part of this list and have their own entry requirements. These rules will also not apply to any travel to Ireland.)

The 'six months left' rule sounds simple, but one factor is confusing some people. And it's all to do with previous renewal. British passports can be valid for up to 10 years. But if you renewed your previous passport earlier than you needed to, an extra nine months could have been added to the passport you now have. Unfortunately, these extra months will not be accepted within the Schengen zone. The crux of the matter is that you may believe your passport will be valid come March 29, but you could well be wrong.

The Home Office told Which? that 3.5 million passports could be affected by this. In a statement, travel editor Rory Boland said: "People will be shocked to hear that they could be turned away at airports and prevented from going on holiday — even when their passport is valid for another 15 months. As this potentially affects the travel arrangements of millions of people, the government and travel companies must urgently up their efforts to ensure holidaymakers have clear and accurate information — so that no-one is left stranded at the departure gate."

The government has launched a tool to help you check your passport's validity. All you have to do is enter some basic information including where you are travelling to and when, your date of birth, and the issue and expiry dates of your current passport. If the site states that your passport will not be valid post-Brexit, you are advised to apply for a new one as soon as possible.

Remember that this new rule will only apply if the UK leaves the EU without a deal. But if you are planning to travel to Europe any time soon, it may be best to err on the side of caution. Next week will see a vote on May's amended Brexit deal. If MPs still cannot agree on this deal and if May refuses to revoke or extend Article 50 by March 29, a no-deal scenario is inevitable.

The full list of countries that make up the Schengen area are as follows:

If you do have to renew your passport, you unfortunately won't receive the old-school blue-and-gold version. The government have announced that this new colour scheme won't be introduced until October 2019.